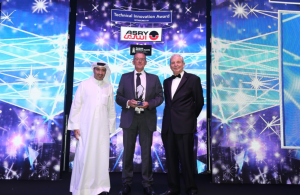 The Wärtsilä Sternguard In-water Serviceable Seal has won the Technical Innovation award at the Seatrade Maritime Awards for the Middle East, Indian Subcontinent & Africa. The award was presented in a ceremony held on 31 October 2016 in Dubai. Wärtsilä Sternguard In-water Serviceable Seal was also chosen as the winner of the Environmental Technology Award at the Ship Efficiency Awards on 2 November.

The winner of the Seatrade Maritime Award was chosen by a jury comprising of technical and operational judges as well as industry judges, representing several renowned marine and energy companies in the region. The judging panel of the Ship Efficiency Awards consisted of independent experts from, among others, Lloyd’s List and University College London. The global Ship Efficiency Awards recognise excellence in operational and energy efficiency as well as technological innovation.

Wärtsilä’s ground-breaking seal is the first of its kind on the market and a result of extensive market research, data analysis, product development, testing and validation. It has been type-approved by the major classification societies.

“There was a need in the market for an innovative, cost saving and technically superior solution to in-water seal repairs. Using the Wärtsilä ‘Voice of the Customer’ process we reached out to an extensive customer sample covering key market sectors to establish their exact requirements in respect of product solutions, service requirements, innovation ideas and technical excellence desires. Wärtsilä Sternguard In-water Serviceable Seal was developed to answer all these needs,” says Damian O’Toole, Director, Wärtsilä Seals & Bearings.

The Ship Efficiency ‘Environmental Technology Award’ being presented to Chris Rawlinson of Wärtsilä by Jarle Homelid from Tero Marine.

Winning combination of performance and endurance

The Wärtsilä Sternguard In-water Serviceable Seal, launched in December 2015, is a fully split, underwater serviceable seal that minimises overhaul downtime and costs. The seal has been designed to provide a smoother, faster service, as well as enhanced overall performance and endurance. The Wärtsilä Sternguard In-water Serviceable Seal can be used to retrofit any other type of seal and is available for merchant, offshore, IWW and cruise & ferry vessel types, running on Environmentally Acceptable Lubricants (EALs) or mineral oils.

“We are very happy to receive this recognition from both the Seatrade Maritime Awards and the Ship Efficiency Awards. We take great pride in Wärtsilä Sternguard In-water Serviceable Seal, which as the first fully diveable seal on the market and represents our long history in designing, developing and manufacturing seal products to serve a variety of customer segments and needs,” says O’Toole.

The Seatrade Maritime Awards were held for the 14th time, under the patronage of His Excellency Sultan Ahmed bin Sulayem, Group Chairman and CEO of DP World and Chairman of Dubai Maritime City Authority (DMCA). The Ship Efficiency Award ceremony took place in London, with Lloyd’s List as the event’s host partner.