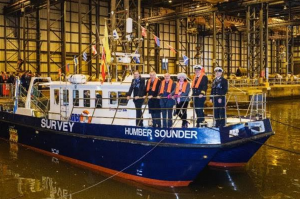 ABP has celebrated the launch of its latest survey vessel Humber Sounder with a naming ceremony at the Port of Hull.

The ceremony, which was conducted by Father Colum Kelly of the Apostleship of the Sea, was attended by ABP staff and customers, as well as representatives of Blyth Workboats, which built the 14-metre catamaran. The Humber Sounder will be used to survey and manage the channels and waterways in and around the Humber Estuary.

The Humber Sounder represents a £550,000 investment under ABP’s Vessel Replacement Programme, which was established to support its customers and other river users in operating safely, sustainably and efficiently.

Harbour Master for the Humber Andrew Firman said: “The Humber is one of the most challenging waterways in the world, with a catchment area of around 10,000 square miles, draining around 20 per cent of England’s water into the North Sea. It also has up to 10 million cubic metres of silt in suspension at any one time, which unfortunately has a habit of coming to rest in inconvenient places.

“The Estuary has some of the largest tidal ranges in the UK and the shallowest shipping lanes and this makes managing these lanes and channels a challenge for us all.

“This new vessel is manoeuvrable enough to negotiate the narrow confines of the Ouse or the Trent, while at the same time the twin hulls provide a stable platform for surveying in the more interesting conditions of the North Sea.”

The Humber Sounder is fitted with almost £250,000 of survey equipment which operates to centimetre accuracy and an ‘A’ crane on the deck which allows greater versatility of operations. The addition of a ‘moon pool’ system means expensive and very delicate cameras and survey equipment can be safely stowed when not in use.

The wheelhouse can carry 12 passengers and crew and includes a suite of technology from forward-looking sonar and deck cameras to assist with operations of the vessel in close quarters or shallow waters, to a bank of touch-screen monitors which can display information quickly and easily.

Over the next five years, ABP is investing approximately £1 billion in a wide range of major projects across the group.

The four ports of Grimsby, Immingham, Hull and Goole handle more than 61 million tonnes of cargo between them each year worth approximately £75 billion.

All aboard the IMO kids’ zone