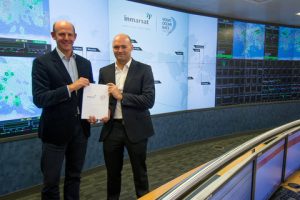 The ongoing partnership advances the possibilities of onboard satellite communications and powers the Race’s digital content delivery from the oceans, while supplying crucial safety and tracking services.

Inmarsat’s fleet of satellites, some 36,000km out in space, deliver the Race communications technology. Inmarsat FleetBroadband provides an ‘always-on’ connection for teams allowing applications such as internet access, emails, calls, weather reporting and telemedicine. It also features streaming IP available on demand, for live applications such as high-quality video streaming. Global Xpress will make its first contribution to the Race supporting press and media at race villages throughout the globe.

The 2017-18 Volvo Ocean Race is pushing the boundaries not only in terms of racing conditions and locations, but also in the delivery of safety services and creating an ‘on-board’ digital experience. For the first time, sailors will be able to post on social media during every leg. More content than ever before will be able to be beamed ashore using the Inmarsat satellite network.

In addition to Inmarsat C safety services and tracking devices, each of the Volvo Ocean 65 boats will also carry an IsatPhone 2 satellite phone in their life raft packs.

“Inmarsat is absolutely thrilled to provide onboard connectivity to the Volvo Ocean Race for the fifth consecutive time. Once again, we will provide support for the sailors in terms of safety, communications and advanced broadcasting,” said Rupert Pearce, CEO of Inmarsat. “The partnership with Volvo Ocean Race allows Inmarsat to showcase our cutting edge, reliable technology that connects sailors to the rest of the world, even from the most isolated locations.”
Since 1973, the Volvo Ocean Race has set the standard for modern ocean racing, with the world’s best sailors facing extreme conditions over a 45,000 nautical mile race track. The next race will depart from Alicante, Spain on October 22, 2017 and will visit a total of 11 cities across five continents.

“We’re delighted that Inmarsat will once again supply the network and services to power multimedia reporting from the boats throughout the Race, as well as the maritime safety systems to ensure we can track the boats across the world’s oceans, from where they will offer live video and audio communications, plus, for the first time, social media interaction.”

“During the last edition, our partnership with Inmarsat helped to deliver some of the Volvo Ocean Race’s most memorable moments, such as broadcasting live from Cape Horn as the fleet rounded, and enabling satellite connection to the Team Vestas Wind crew grounded on an atoll in the middle of the Indian Ocean.”

Inmarsat plc is the leading provider of global mobile satellite communications services. Since 1979, Inmarsat has been providing reliable voice and high-speed data communications to governments, enterprises and other organizations, with a range of services that can be used on land, at sea or in the air. Inmarsat operates in more than 60 locations around the world, with a presence in the major ports and centres of commerce on every continent. Inmarsat is listed on the London Stock Exchange (ISAT.L). For more information, please visit www.inmarsat.com.

The Inmarsat press release newsfeed and corporate updates are on @InmarsatGlobal.

About the Volvo Ocean Race
The Volvo Ocean Race is the ultimate ocean marathon, pitting the sport’s best sailors against each other across the world’s toughest oceans. The legendary race that began in 1973 will start from Alicante, Spain in October 2017 and finish in The Hague, Netherlands in June 2018. Featuring almost three times as much Southern Ocean sailing as in the previous edition, the Volvo Ocean Race 2017-18 will be contested over the longest distance in the race’s history at around 45,000 nautical miles, crossing four oceans and taking in 11 major cities on five continents.
The Volvo Ocean Race has been the global sponsorship flagship of Volvo Group and Volvo Car Group since taking ownership of the Race in 1999. The Volvo Ocean Race is operated as a non-profit organisation.