Gibdock welcomes back a familiar guest from Louis Cruises

A familiar cruise ship visitor has returned to Gibdock, with the Gibraltar yard undertaking exacting repair and renewal work on Thomson Majesty, the Thomson-operated luxury vessel owned by Louis Cruises.

The project involved two weeks in Gibdock’s No. 1 dock for the 207m loa (41,000gt) vessel within a fixed schedule, after Thomson Majesty came off her summer port rotations, in preparation for her regular winter cruising duties. The vessel left the dock on November 18, before departing the yard on November 21.

“Gibraltar is a popular destination for cruise ship calls, and it is especially satisfying when Gibdock’s capabilities for on-schedule high quality work are vindicated by a high-profile owner in the luxury cruise market,” said Richard Beards, Gibdock Managing Director. “The yard makes a vital contribution to the economy of Gibraltar, and is proactive in its service provision in this specialised ship market.

“Gibraltar Port Authority continues to make strong efforts to attract cruise ship calls, and we are delighted to showcase how our capabilities continue to align with the Gibraltar’s wider aims. It has also been a pleasure to renew our longstanding relations with Louis Cruises.” 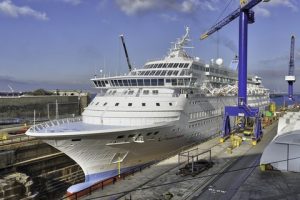 Another view of the “Thomson Majesty” during her dry-docking

The docking of Thomson Majesty coincided with the ship’s intermediate special survey. In addition to high pressure hull-washing and a new antifouling coating, the renewal of seals on one stabiliser and one stern thruster, pipework and anchor chain renewals and propeller polishing, the project’s scope included extensive steelworks in way of the double bottom tanks and engine tank tops. Fourteen of the ship’s lifeboats were lifted ashore for inspection and bracket renewal, while davits were also tested.

Crysanthos Crysanthou, Technical Manager, Optimum Ship Management Services, Greece, which represented the owner on this project, said: “We are delighted with the efficient way that Gibdock handled the various items of work required on Thomson Majesty, ensuring that she left the yard on schedule. For cruise ships, with pre-planned itineraries, there is no scope for any delays, and having used the yard before, we were confident that they would redeliver as promised – which they did! The location of the yard was also ideal for Thomson Majesty, which is currently undertaking a series of Mediterranean and Canary Islands cruises, meaning there was minimal deviation from its primary routes.”

A part of the project required access holes to be cut into sections of the ship’s flat bottom. A prior inspection of the ship in Las Palmas and detailed measurements were carried out by Gibdock project manager Jonathan Pocock. “It was essential that the ship was repaired to the highest standards, but also in and out of the yard on time for her next cruise,” said Mr Pocock. “By pre-planning, we were able to prefabricate steel sections and optimise work processes during the project.”

Mr Beards added: “Our location at the gateway of the Mediterranean brings us to the attention of the cruise ship market, but we know that it is only by redelivering ships on time, on budget and to the highest quality standards that we have continued to hold that attention.”

Swords and globes for world leaders in health, safety and environmental management