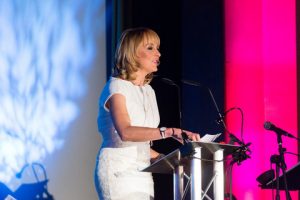 The deadline for the Mersey Maritime awards is fast approaching so businesses connected to the maritime industry in the North West and Isle of Man are being encouraged to get their entries in by the 6th January, 2017.

For the third year running popular television presenter Louise Minchin will be hosting the Awards Ceremony.

Louise has been a regular on our television screens for some years. Since 2006 she has been an anchor on BBC1’s early morning Breakfast show, which she currently co-hosts with Dan Walker. She has also co-hosted BBC’s Real Rescues with Nick Knowles and Chris Hollins and is a regular guest presenter on The One Show and Radio 4’s You & Yours. Recently Louise has taken part in the historical challenge ‘Time Crashers’ for Channel 4 and surprised herself by reaching the final of Celebrity Master Chef.

Louise said: “I have really enjoyed presenting the Mersey Maritime Industry Awards for the past two years, and I am delighted to have been asked to return for the third year running. These Awards are a wonderful opportunity to recognise the hard work and achievements of companies in the maritime sector.”

There are 11 award categories and entry into more than one is permitted if the appropriate criteria are met.

One award winner last year was supply chain and logistics management company Warrant Group, whose Managing Director, Ian Jones, said: “Warrant Group won the Freight & Logistics Award at the 2016 MMIAs in March. Our win gave us fantastic recognition among our industry peers and also provided a huge boost to the staff team at Warrant whose hard work made it possible. If businesses are considering entering I can heartily recommend they get involved.”

The 2017 MMIAs follows on from the success of Mersey Maritime’s previous two annual awards events and is set to be the best yet with two new categories added in response to industry feedback.

The awards will be presented at a special gala dinner on 9th March, 2017 at Liverpool Football Club’s new Main Stand.

Application packs can be downloaded at http://bit.ly/2fUAwkJ