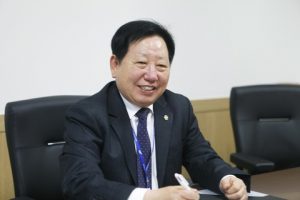 The Korean Register (KR) – an IACS member classification society – has announced that Mr. Lee Jeong-kie has been elected as its new Chairman and CEO. Mr Lee was elected at the extraordinary meeting of KR’s general assembly which oversees the running of KR and comprises 86 voting members. Mr. Lee assumes the role of Chairman and CEO, following the death of Mr. B. S. Park, who passed away after a short illness in October 2016.

This is only the second time in KR’s 56 years of history that an internal candidate has been appointed as Chairman and CEO. Mr Lee has worked for KR for 29 years, most recently as executive vice president of KR’s survey division.

Mr. Lee graduated from Busan National University with a bachelor’s degree in naval architecture and started his career as QC at Korea Shipbuilding Public Corporation in 1978. He later joined DSME where he worked as QC until 1987.

KR’s new chairman has extensive field survey experience and has contributed significantly to the enhancement of KR’s global port state control response. He has also played a key role in increasing KR’s global scope, gaining important authorizations to provide statutory services on behalf of shipping and maritime organizations, particularly in Germany and Canada.

On being elected Mr. Lee said:

“KR is facing many challenges following the prolonged downturn of the shipping and shipbuilding industries, and as a result of the liberalization of classification services in Korea. I am keen to support and enhance our services under these conditions”.

“I look forward to building on KR’s strong industry reputation, and to increasing our global competitiveness by enhancing our expert survey and technological competence. Moving forward, KR will look to provide bespoke services to meet clients’ specific requirements and will explore the expansion of business services through diversification”.

The Korean Register is an IACS member classification society established in 1960 with the purpose of promoting safety of life, property and the protection of the marine environment.

KR currently classes an international fleet of 3,039 vessels totalling 69 million GT. It is headquartered in Busan, South Korea and operates a network of 61 offices around the world. It is authorized to perform statutory and certification services in 73 countries.