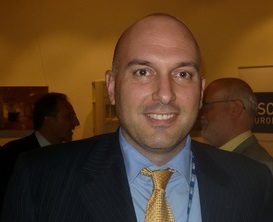 Since its inception in March 2015, the Hellenic Association for Energy Economics (www.HAEE.gr) acts as an interdisciplinary forum / think tank that promotes the exchange of ideas, research results and experiences among academics, professionals, business executives and other stakeholders related to energy, environment and economy.

HAEE will soon complete a year of constructive operation, having covered a wide range of issues concerning the relations among Greece, Balkans, the wider Eastern Mediterranean region and the MENA region, with many major global players in the energy field.

Being the official Greek affiliate of the International Association for Energy Economics (www.IAEE.org), HAEE completes the missing link in the global chain of information and cooperation among the largest private, public, academic, research and journalistic entities of energy from US to the Russian Federation and China and from Europe to the Middle East, central Asia and Africa.

The main objective of HAEE is mostly responding to the energy needs of our region, through the exchange of ideas and the close cooperation among the Greek energy agencies, both private and public, and those of other countries in order to achieve synergies for their common benefit.

The first major international conference organized by HAEE was named “Energy Market: Unlocking Greece’s Economic Potential” and it was focused on Energy and Economic Development. Under the auspices of H.E. the President of the Greek Republic, Mr Prokopis Pavlopoulos and the support of the Environment and Energy Ministry, the European Commission Representation in Greece and the World Energy Council, successful business practices were presented for the strengthening of the energy sector and the development of the Greek economy. During the official dinner of the conference, the President of IAEE handed an honorary plaque to the HAEE and its Chairman, Professor Dr. Kostas Andriosopoulos, for its contribution to energy economics.

As part of the 4th Greek-Russian Social Forum, the HAEE had the honor to host the first Greek-Russian Energy Conference named “Energy cooperation: Base for a long term and mutually beneficial relationship“. In the conference were given speeches by both ministers of Foreign Affairs of Russia and Greece, Mr. Sergei Lavrov and Mr. Nikos Kotzias, by the Minister of Environment and Energy, Mr. Panos Skourletis, the Deputy Minister of Foreign Affairs, Ioannis Amanatidis and by other senior energy company executives.

Aiming to highlight the latest developments in the exploration and production of hydrocarbons in Western Greece, the HAEE in cooperation with the Chamber of Commerce of Achaia and the newspaper “Peloponnisos” organized the “First Energy Forum for Western Greece“, supported by the Chamber of Achaia. Among the discussed topics were the developments of the newly shaped electricity market in Greece, the current presence of the alternative electricity providers and their contribution to energy costs’ reduction.

Alongside the conferences organized in 2016, the HAEE supported activities and events on energy in Greece and abroad, such as the fifth energy conference “Energy, Growth and Sustainable Development: Opportunities vs. Country Risk” in Athens on April 21, the second Eurasian Natural Gas Infrastructure Conference that took place in Athens on 22 and 23 May 2016, the Regional Conference of the ENTSO-e “Adding the last piece of the puzzle: Integrating South East Europe into the IEM, South East Europe” in Thessaloniki on November 3, the “Greek-French forum for Entrepreneurship and Innovation” at the French Institute in Athens Greece on 24-25 November, as well as the first Energy Symposium of the Italian Affiliate of the  IAEE “Future Challenges to Energy Security” which took place in Milan on November 30th.

Being focused on the development of the energy and environmental sector in Greece, HAEE will soon complete one year of operation with great success while preparing the next steps for 2017. More specifically, HAEE is already organizing its 2ndmajor international conference named “The landscape in the new era of energy transition: challenges, investment opportunities and technological innovations “, which will be held at Metropolitan Hotel Athens on 18-20 May 2017. Finally, aiming at the exchange of ideas, research results and experiences among academics and professionals from all areas related to energy, environment and economy, HAEE is already scheduling targeted energy forums in Athens and in other regions and cities of the Hellenic Republic, which will be announced in early 2017.

The Board of HAEE sends to all our members (current and future members!) as well as to all our friends and supporters, best wishes for a Happy New Year, full of Health, Creativity, and of course positive Energy!