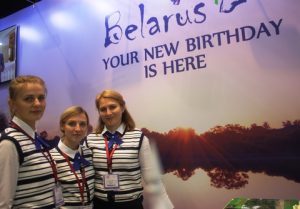 Some of the Belarus team at WTM.

By James Brewer and Graciete Amaro

Meeting exhibitors from around the world who are attired in their beautiful national and regional dress is a memorable feature of the annual World Travel Market in London, and the delegation from Belarus to the 2016 show added one such welcome splash of colour to wintry London.

A chat with the Belarusians led us to research the intriguing history of their country which has highlights glorious and otherwise – it is often forgotten that this land played an important role in the first accurate three-dimensional measurement of the Earth. We return to this scientific theme, which has merited a Unesco heritage listing, later in this article.

Businesses supporting the Belarus display at WTM were Belarus National Tourism Agency, Belarustourist, Minsk Tourist Information Centre, Prime Tour and Paradise Travel, all based in Minsk. From the last-named company, director Irina Zhukova and her colleague Darya, in elegant traditional apparel, made a splendid impression on everyone who visited and passed near the stand during the three days of the fair.

This led us to enquire about folk traditions, and as a visit to an open-air museum (known as a skansen in much of Europe) is a treat in any country, we were pleased to learn of the Belarusian State Museum of Folk Architecture and Rural Lifestyle, 4 km from the capital Minsk, which has 25 traditional buildings with restored interiors. 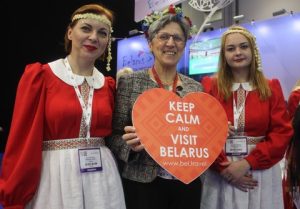 Irina (left) and Darya from Paradise Travel, with Graciete Amaro

Further, there is a complex of ancient crafts located 40km from the capital. It is called the Dudutki museum and is in a picturesque setting near the Ptich River, one and a half kilometres from the village of Dudichi.

The village was first chronicled in the 11th century, the museum’s website says. “According to the texts of The Tale of Igor’s Campaign and the opinion of some researches, a legendary Polotsk prince Vseslav the Sorcerer wended his way to Polotsk using the road that supposedly passed through these places in the past.”

In the 20th century, the nobles who ran the estate fled overseas as World Wars I and II and the impact of the 1917 October Revolution encroached on their heritage, leaving in Dudichi only the remains of a watermill and a system of channels. A businessman-publisher in the 1990s started a farm on the site as the nucleus of a museum and since 1998 under new ownership the museum complex has featured a functioning windmill and workshops in carpentry, ceramics, baking, cheese-making and other skills.

1941 was the start of what is termed in Belarus the Great Patriotic War, when there was a terrible toll on the country – one in every three citizens perished. Military history is thus a big and sombre theme throughout the land, on which over the centuries many rival powers trampled to fight their battles and persecute the population, and an important branch of tourism focuses upon it.

For all but the most enterprising tourists, Belarus might be well down the must-see list, but unsurprisingly it is popular with citizens of neighbouring Russia and Poland. People from elsewhere might find wrestling with the visa formalities (specialist travel agencies can help) would prove worthwhile.

The Belarus team at the World Travel Market emphasised that there is a lot more to their country than the first stop of Minsk, magnet though that is. National parks, reserves, forests, lakes, castles, manor houses, festivals and individual features of various towns deserve attention.

As a bonus, the holidaymaker will find prices in Belarus generally more affordable than those in Russia, it is said. 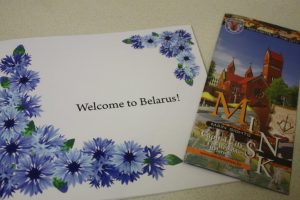 Brochures from Prime Tour and from Minsk Tourist Information Centre.

The country is spread over 207,560 sq km, making it slightly smaller in area than the UK. Minsk, population 1.9m out of 9.5m nationally, hosts many cultural splendours including the National Academic Bolshoi Opera and Ballet Theatre and the National Library, one of the largest in the world, consolidating in 2006 collections previously held in six buildings. Minsk-Arena is described as one of the most modern multifunctional complexes in Europe, designed for international sports – including cycling, skating and hockey – and cultural and recreational activities.

Important churches include the baroque Cathedral of the Blessed Virgin Mary, which has had a chequered history. Damaged during World War II, it was rebuilt for the sports club Spartak, but “returned to believers” in 1993 with much restoration inside and out.

The only Orthodox church in Minsk is the Cathedral of Saints Peter and Paul, built 1611-1613 with bulky walls and high windows for defence that made it an impregnable fortress.

Ploschad Nezavisimosti (Independence Square, formerly Lenin Square) in central Minsk dates from the 1930s. It has the main building of the Belarusian State University, the municipality the pre-war Government House, and the pre-revolutionary Red Church – the Church of Saints Simon and Helena which had various functions including as the Museum of Belarusian Cinema before being returned to the Roman Catholic Church in 1990.

Four locations in the republic are on the Unesco World Heritage List. Mir Castle Complex and Niesvizh Castle “will unveil the secrets” of the aristocratic Radziwill family. Belovezhskaya Pushcha National Park is the surviving section of the primeval forest which once stretched from the Baltic Sea to the Buh River and from Odder to the Dnieper River. The park is 340km south-west of Minsk in the Brest region on the border with Poland. It has the beauty of a living Eden, say tourism authorities.

The forest suffered badly during World War II, when more than 4.5m cu m of timber was cut down. There are 600-year-old oaks and 300-year-old pines among which roam lynx, wild boars and red deer, with white-tailed eagles up above. Most intriguing is the symbol of the forest, the auroch, a kind of bison which is related to an ancient breed of cattle contemporary with mammoths and woolly rhinos. An article in the Minsk Herald related that the last Belarusian auroch was killed in 1919 by a local forester, but in 1946 five animals were brought in from Poland to found a new strain.

The fourth Unesco site is the Struve Geodetic Arc, also known as the Russo-Scandinavian meridian arc. It was the first accurate measurement of a meridian and is in effect the longest monument in the world. It stretches through 10 countries along 2,820 km, as a chain of survey triangulations. Starting from near the port of Hammerfest – the world’s most northerly city – in Norway, it makes its way to the Black Sea,

The survey chain was the brainwave of Friedrich Georg Wilhelm von Struve of the St Petersburg Academy of Sciences who founded the Pulkovo Observatory near that city, and the painstaking work took from 1816 to 1855 to complete. The aim was to establish the exact size and shape of the earth. His early 19th century calculations differ by only 3.5 cm from the observations recorded by modern satellites.

Struve strove to register geodetic points on the longitude 25 Degrees East. Originally the Arc included 265 points – in Norway, Sweden, Finland, Russia, Estonia, Latvia, Lithuania, Belarus, Moldova and Ukraine. Alexander II of Russia, and Carl XV King of Norway and Sweden, decreed that these points should be marked with monuments. Today there remain 34 commemorative plaques and obelisks out of the 265. In all, 31 points were fixed on Belarusian soil, more than in any other country.

A brand new scientific initiative is the “miracle bench” In Vileyka, a town 100 km from Minsk. The bench, in the grounds of Vileyka State College, is modelled on the fortress gates of the Russian city of Kazan, and linked to it is a telescope, making it an astronomical bench from which the stars can be observed…

Minsk has its share of leading museums: the Belarusian State Museum of the Great Patriotic War, the National Art Museum and the National History Museum among them.

In Vitebsk is the childhood home of one of the greatest painters of all time, Marc Chagall.  His museum-house is on one bank of the Dvina river, and an art centre for exhibitions dedicated to him is on the other.

Meanwhile, the capital’s night life has been augmented with the opening of the first bar with a skyscraper view over the city. The DOTXX1 bar is on the 21st floor of the new shopping centre Galleria Minsk, next to the Double Tree Hotel by Hilton. Cocktails and French champagne are served, and German chef Gerald Reichstein prepares pan-Asian cuisine.