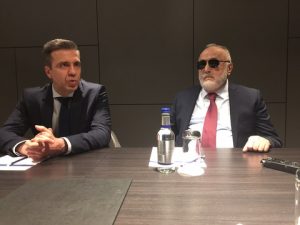 Two days ago, on 15th of February, the Greek Minister of Shipping and Islands Policy Panagiotis Kourouplis gave a press conference at  the Riverside Plaza Hotel by the River Thames. Anna Menis was there; she says:

Further to our mentioning on the same day the 15th of February in our daily report, the minister advised the London Greek media on his  visit and the meetings held in the administrative capital of shipping, as London is known…

He explained the various topics he discussed with the Greek Shipping Cooperation Committee over lunch, as well as with his counterpart, under-secretary for Transport Lord Ahmad of Wimbledon, his meeting at the IMO  with Secretary-General Kitack Lim and on others he met.

Regarding the BREXIT issue, he explained the importance of keeping the existing excellent relations between the United Kingdom and Greece in the maritime sector and especially he stressed the issue of maritime education and training.

During these meetings he extensively outlined the targets of the Ministry’s plans in the coming years:

1.Long time matters related to the labour relations between the ship owners and the seafarers that need to be solved. Major importance should be given to a high quality maritime education and training.

2.Coastal shipping to be advanced including the communication between Greece’s numerous islands.

3.Maritime Tourism and the Cruise industry development are of major importance. Same applies for the Ports and Terminals infrastructure. The Visa policy does matter, however, terrorist attacks in neighbour Turkey influence negatively the Greek Cruise industry.

4.The port industry in Piraeus, Thessaloniki, Kavala, Lavrio, Herakleio, Alexandroupolis can and must prosper.

5.The Shipbuilding and Shiprepair zone in Perama area off Piraeus needs to be revived in accordance with the policies for renewable resources.

7.An efficient collaboration / synergy between the Universities and the Shipping Industry should be established. However, serious problems of bureaucracy must be sorted out the soonest.

8.The city of Keratsini – just off the Port of Piraeus, was mentioned and proposed to become a global Maritime Centre in the years to come with the partnership and support of ship owners.

9.More ships to be under the Hellenic Classification society as its significance counts a lot!

10.A major renewal / upgrade program for the vessels and equipment of the Hellenic Coast Guard is expected. Extensive relations with the research departments of Universities in Greece and abroad are about to take place soon.

Moreover we mentioned that the shipping industry should not be limited by regional barriers, since it is a global phenomenon.

At the end of his presentation, a direct questions session began with  journalists representing various Greek media in London as well as local and international media and he was very open in replying to their questions.

The Greek Ambassador in the United Kingdom Mr. Dimitris Karamitsos-Tziras was also present, Vice Admiral Agisilaos Anastasakos from the Hellenic Coast Guard HQ, the Greek Shipping Attache Captain (HCG) George Skandalis and the minister’s team from Piraeus were there and participated in a drinks a dips reception that followed.

We further asked him on the difficulty in gaining investments in Greece, jobs – particularly for youngsters and on the issue of registering ships under the Greek flag vis-à-vis the taxation hurdles… Considering also the instability of the taxation policy, how these factors can influence the Greek Economy and Shipping in general? He answered by saying: “I have already discussed these issues with the Government. The Government considers these implications and does as much as possible to rectify same taking on account external pressures.”

BREXIT and its implications for regulating takeovers in the UK: Why Law matters