With …Modesty Blaise in my mind, Modesty is the best charisma we should all possess… The BDI (Baltic Dry Index) gained a dozen points since yesterday but all in all the dry market indices rise has been considerably low, following the previous days’ good pickings. The Geopolitics though are strange and become more sour. John Faraclas’ daily briefing:

The Panamaxes did in comparison a bit better with 26 points plus and now the BPI stands at 1220 points.

Single figure, thank Posidon and all the Sea-Gods, on the plus for the Supras’ BSI ending the day at 868 points – + seven.

Plus eight points for the Handies’ NHSI which now comfortably reads 485 points.

CAUTION as we are 1,200 points below the end of December 2013 levels and this is the harsh reality.

Same, more or less, levels for the Wets; the last published BDTI (Dirties) and BCTI (Cleans) stood at 839 – just a point being added, and 620 – three points plus respectively.

Good news for the WTI, it ended the day, as these lines were written just before midnight at US$ 50,20 !!! A good drop, sorry for the companies et al, but very good for the poor masses…

The geopolitical front continues with the same pace and issues remained the same, save some BREXIT surprises(?)…

The MIGRANTS still on top.

The Middle East mess in Syria and Iraq and the wider region still the same; good to read some advancements and the destruction of ISIS…

The Turkish saga continues both within – referendum and without …err externally; CAUTION as there are rumours that its “Allies” USA and Russia have other designs… for the entire region… Meantime Turkey should stops pestering its neighbours, particularly Greece and Cyprus as well as a better manner behaviour should be exercised when exchange response with the European Union Members. The comments we read are despicable and it’s time Turks be reminded of the cliché : See who’s talking…”.-

Next door in Greece  – coincidentally like Turkey, within and externally the situation remains the same… Time for Alexis Tsipras to admit that he failed… It is good on all counts to “reach” the top with a little help from your  protégés too, but the end result of governance in all fronts is what counts… None of these MPs and MEP’s of the Athenian Muppet Puppet Show knows how to negotiate… Pity as non has learned from the successful capabilities and skills of the Greek Shipbrokers…

BREXIT indeed has a long way to go, and seems that Mrs. May has a task to perform. Despite hiccups and various views she continuous… Caution for the Chancellor’s Budget; Philip Hammond must ensure this budget has a good projected safety as he might not have an idea what BREXIT brings as and when same is completed. Meantime and as today is Women’s Day, we are more than pleased to read Teresa May’s announcement that the Government will spend £20 mio on helping women suffering from domestic violence and abuse and another £5 mio to assist women return to work after having children; great news!!!

Europe is in an election fever; France will see upheavals with the forthcoming presidential Elections; Germany too might see the end of Angela Merkel’s era – a very debatable ending, or she has more arrows in her quiver…

The Mighty Continent needs a leader, a vision and a real Constitution, the rest is nonsense …

Putin’s Russia must also get the message that the Mighty Continent can strike back. Having said, and written this, the US and Europe leaders must understand were Russia’s rights stand and then a mutual respect should prevail. If not, expect the worse to come.

China in red; the Beijing strategists do not have a comprehensive business plan…

Japan is always a superpower to all intents and purposes…

The subcontinent continues with too many issue.

Africa must also be streamlined within and also a deal must take place amongst the new super powers wanting to have their presence there, and proxy wars are the next things to see.

In the USA, president Trump has a great task to finish, once he come to power he must prove both his intentions for furthering the level of life for all American people, the American Continents, yes with an s and how he manages world peace, business – trade in particular. 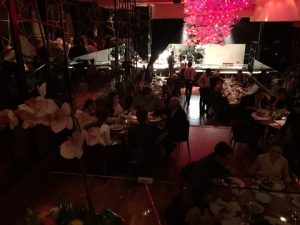 a panoramic view of the one third of the Dstrkt tables – a great gathering!

On another note, today we celebrate the International Women’s Day and we are sending a strong message to all for the importance of Women. Our industry being the first to recognise Women. WISTA is the most appropriate response! We had a n exceptional Women’s Day too during the Greek press Associations Annual dinner at Dstrkt London Club in Soho were nearly 100 members and guests – a new record, attended the event with a sort but to the point presentation by Professor and Broadcaster Michael Scott who spoke on “The message of Delphi for Greece and the World today”.

All sectors of the media, Greek, British and international were well represented as well as their friends/ guests from all sectors of the industry, amongst them economist Vicky Price, well acclaimed book writer Victoria Hislop, Athena Paris, Imperial College’s Prof. Christos Papavassilliou and many form the greek shipping fraternity. Interesting words at the beginning by Geoffrey Robertson. The Parthenon Marbles are an issue, not a thorny one as many try to portray that needs a solution here and now.

Wishing All Women a better future and let this Women’s Day be the beginning of a major change.

Have a nice evening and be on guard for every eventuality, particularly from any kind of terrorists.