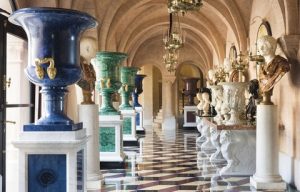 He entertained friends and associates from the business world including Greek shipowners and reigning and exiled kings of Europe at his palatial homes and on his luxurious yacht.

Wealthy property magnate Robert de Balkany died in France in September 2015, at the age of 84, and now more than 700 valuable artworks from two of his residences, Palazzo Lancellotti in Rome, and Château Balsan in the village of Èze with its famed views over the French Riviera, are to go on sale.

The auction Robert de Balkany: Rome and the Côte d’Azur will take place at Christie’s King Street, London, on March 22 and 23 2017. 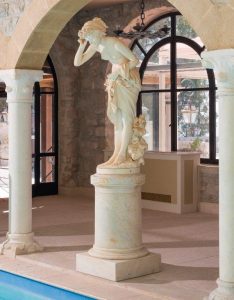 The sales – which are expected to realise in the region of £7m combined – will be a testament to Mr de Balkany’s discerning eye and vision as a collector and connoisseur, says the London auction house.

Mr De Balkany made money from shopping centres and other assets in France and Spain, including the Palau de Mar complex in the Port of Barcelona.

The treasures in his exquisite homes were surely appreciated by his high-profile friends from business, polo, yachting and the aristocracy. His second marriage in 1969 was to Princess Maria Gabriella of Savoy, a daughter of the last king of Italy.

Royalty who frequented Èze with its stunning sea views, and the de Balkany yacht, included Prince Rainier III and Princess Grace of Monaco, Leopold III and Princess Lilian of Belgium, and Constantine II and Anne- Marie of Greece.

Alexander and Diogenes. By Diziani.

Mr de Balkany, who was of Romanian origin, was a passionate collector of European and English fine and decorative art, particularly clocks, silver, furniture and Old Masters. He amassed works with an eye to creating sumptuous interiors. He decorated his houses with richly-worked textiles and materials of the highest quality, his tastes spanning periods from the Renaissance and the Baroque to Neoclassicism and the Empire and Regency periods. He acquired pieces over more than half a century to supplement those he inherited from his father.

His tastes included various pieces with Greek themes. For instance, on sale is a huge Duke of York silver-gilt candelabrum centrepiece by Edward Farrell, depicting Hercules slaying the Hydra (estimate £400,000 to £600,000, or $488,800 to $733,200). Modelled as the second labour of Hercules in which he slays the Hydra, the base is applied with foliage and creatures among which rests one of the severed heads of the Hydra and supports a figure of Iolaus who is holding a dagger to one of the necks of the monster. All this is surmounted by Hercules, draped in a lion’s pelt and loin cloth, wielding a club. The fearsome nine heads form the candle sockets, and a large crab clings to the right ankle of Hercules. Two other works by the silversmith Edward Farrell feature separately in the collection.

The Banquet of Antony and Cleopatra. By Diziani.

Six oil paintings on canvas depict scenes by Gaspare Diziani from the life of Alexander the Great (estimate for the six works as one lot is £120,000 to £180,000, or $146,640 to $219,960). The subjects are Alexander and Diogenes; Alexander and the family of Darius; Alexander before the body of Darius; the death of Darius; the death of Sophonisba; and the banquet of Antony and Cleopatra.  Diziani (1689-1767) was based in the Veneto for the latter part of his prolific career, which involved commissions for altarpieces, mural decorations and easel pictures. It is fortunate that the set of six works has remained together, and they are described as “a fine example of his large scale narrative cycles, executed with his characteristic spirited brushwork.”

There is a rare pair of monumental French painted cast iron, over life-size figures of La Garonne and of a nymph with a putto. The groups replicate almost exactly two bronzes from a celebrated series of allegorical and mythological reclining figures created in the late 17th century for the gardens of the palace of Versailles. They attest to the continued fascination into the 19th century for the art created in France under Louis XIV. The estimate for the pair on offer is £80,000 to £120,000 ($97,760  to $146,640). 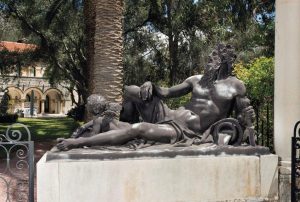 Further examples of the collector’s taste are a pair of large Swedish Blyberg porphyry urns on pedestals from the early 19th century; a pair of French gilt and patinated-bronze busts of Louis II de Bourbon, Prince de Conde (1621-1685) and Henri De La Tour D’Auvergne, Vicomte de Turenne (1611-1675), which were cast in the first half of 19th century; and a Russian ormolu-mounted malachite Tazza c 1830-40. There are more than 60 clocks including a Louis XIV mantel clock with figures of Le Jour et La Nuit after Michelangelo (estimate £80,000–120,000.)

Pedro Girao, chairman of the European advisory board of Christie’s, who was a close friend of Mr de Balkany and his family for several years, said: “Christie’s has long admired the collecting vision of Robert de Balkany. His homes effortlessly combine refinement and luxury and we are pleased to offer this collection, which gives all those who were inspired by his life the opportunity to see how he lived with art.’

The interiors of the Italian mansion were designed by Federico Forquet, and the French château was decorated by Jacques Garcia, who has said of his patron: ‘You taught me that a sense of grandeur is indispensable. This has travelled with me through my life – as it did yours.”

In September 2016, Sotheby’s, in association with the Leclère-mdv, conducted the sale of the Robert de Balkany collection in Paris from the Hôtel de Feuquières in the French capital.

Further details of the Christie’s sales are at www.christies.com