Noerresundby, Denmark, 9 March 2017 – In 2016, Wrist further consolidated its position as the world’s largest supplier of provision and stores to ships and offshore locations, not least through the successful acquisition of Garrets International, the world’s leading provider of provision management services.

Including positive effects from strategic acquisitions Wrist’s sales increased by 13% in local currencies and by as much as 11% in the reporting currency, reaching DKK 4.1bn. The Group achieved growth in volumes. However, organic growth was negative due to weaker demand and especially due to reduced activity in the offshore oil & gas markets.

Consequently, the operating profit (EBITDA) arrived at DKK 206m, 10% lower than the year before, and the corresponding margin was 5.1% against 6.2%. A few business units contributed somewhat less than both last year and expectations, but most of the Group’s operations performed well, considering the overall depressed market.

“We are pleased to report progress in several performance indicators. In total, however, the results for 2016 are not quite satisfactory,” said Robert Kledal, CEO of the Wrist Group.

“Despite tough market conditions Wrist continues developing its strategic platform. During 2016 the Group invested in a range of significant and ambitious projects,” said Robert Kledal.

Early 2016, Wrist announced its acquisition of market-leading Garrets International, delivering provision management services to more than 1,000 ships worldwide. Following the successful integration with Wrist’s subsidiary Sea Star Management the combined organisation is reinforcing the Group’s global proposition to customers, enhancing their ability to provide welfare on board and at the same time securing more resources for the ongoing development of value-adding service tools for crews.

Wrist is confident in building for the future and continued developing its global operational capabilities and infrastructure with the aim of improving the quality and responsiveness of its customer services while at the same time increasing its operational efficiency. Greenfield operations in Hamburg and Las Palmas were started in 2016, and the continued expansion and improvement of warehousing facilities included the important bases in Dubai, Rotterdam and Vancouver, resulting in additional capacity as well as process optimisation.

Scalability of the entire organisation was enhanced, and the Group’s shared service centre relocated in 2016 to Manila. Further, the roll-out of the global business support system – enabling additional digitalised customer and vendor solutions – continued during 2016 as it was implemented in several North American offices as well as in Garrets in Denmark. 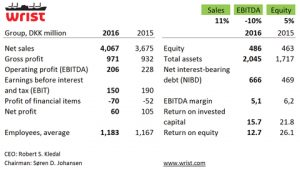 Wrist Ship Supply is the world’s leading ship and offshore supplier of provisions and stores with a market share around 8%. Wrist offers a global 24/7 service, including handling of owners’ goods, shipping, airfreight and related marine services that meet the demands of international organisations as well as local businesses.

From offices around the globe all Wrist staff takes pride in making it easy for customers to receive their supplies – where and when requested – efficiently and at the best possible price. Wrist’s mission is to provide expert care to each ship and offshore location. Since 2007, Altor Fund II GP Limited is the majority shareholder of the Wrist Ship Supply.