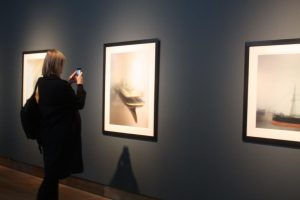 Looming at the viewer from unforgiving mists are ships of all types and sizes dating from the years before the container age. The transports nudge forward from a background of horizon-less sky and sea which looks just ghostly: an uncertain shade of pale.

Such fantastical impressions are created by a series of remarkable photos produced for and in a new display at London’s Science Museum. Depicted are 30 historic models of ships, model which have been conserved by the museum at its Blythe House storage facility. The title to go with this flotilla is Voyages, and the way they have been re-imagined in the photos makes them look as though they are ships of real substance on the move to ply their trade or patriotic duty.

Some bottoms look as though they are emerging from the fog to chase a naval foe, others seem to be lost and drifting, and still others caught in a storm.

The models were on show for almost half a century before the decommissioning, regretted by enthusiasts, of the Science Museum shipping galleries in 2012, and accompanying digitalisation of the collection.

Blythe House, the vast former headquarters of the Post Office Savings Bank, is used by the Science Museum, British Museum and the V&A to store many thousands of small to medium sized objects. The artefacts relate to many sectors, including medicine, telecommunications – and maritime. Blythe House, near Olympia, is open to the public by appointment only, so being able to see the ship model photos in the huge Science Museum building in Exhibition Road is a marvellous opportunity.

These are not just any old photos. They are a commission carried out by London fine art photographers Jonathan Anderson and Edwin Low who have been collaborating under the brand name Anderson & Low since 1990.

The special effects were achieved by shooting the replicas — of merchant vessels, fighting ships, junks and more – through the sheeting that covers them to ward off dust and degeneration.

Romantic and painterly, the resultant images recall great 18th and 19th century paintings including monumental Turner-esque seascapes and, going back further, even canvases of Rembrandt. 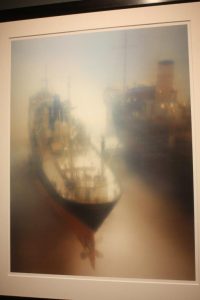 A ship or a chimera?

At the opening of the show Ian Blatchford, director of the Science Museum Group, said that Anderson & Low had found entirely new stories to tell of the old objects. The collections had been re-imagined and revealed in “an incisive and profound way.” They called to mind such gripping tales as the 19th century mystery of the Mary Celeste and of Moby Dick.

Jonathan Anderson spoke of the “echoes of mythology” that arose from the project, creating “an entire world of magic.”

The museum describes the show, which runs until June 25 2017, as “a surprising reinterpretation of a much-loved collection charting the development of maritime history.” Looking at the models through the prism of the protective layer “has had a radical effect on both scale and context.” 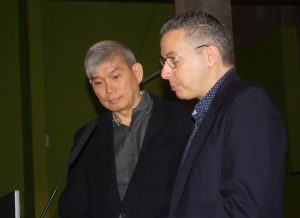 A theme of fantasy, artifice and perception that is seen here is in line with other work published by Anderson & Low. The prints suggest, say the photographers, “previously-hidden dramas and epic voyages for these tiny vessels.” They add: “The inner dramas were present all along, awaiting discovery by any who looked for them.” They quote the physicist William Bragg who said: “The important thing in science is not so much to obtain new facts as to discover new ways of thinking about them.”

An illustrated book, Voyages, priced at £40 is being published to coincide with the exhibition.

Other dramatic projects by Anderson & Low have included in 2015 one around the creation at Pinewood Studios of the James Bond movie, Spectre. The focus is on the huge film sets devoid of people so that they are revealed in their magnificence and obsessive detail, “and ultimately their falsehood.”

In the same year, the duo was commissioned to create images for Star Wars: The Force Awakens. The images were used for the main film posters and merchandising. An earlier project, Manga Dreams, drew much attention and was exhibited on four continents.

Quotes from distinguished authors that are chosen to accompany the exhibition include one from contemporary Japanese writer Haruki Murakami: “It is hard to tell the difference between sea and sky, between voyage and sea, between reality and the workings of the heart.”

For Marcel Proust “the real voyage of discovery consists not in seeking new landscapes, but in having new eyes.”

Voyages, by Anderson & Low is at the Science Museum, Exhibition Road, London SW7, until June 25 2017.  Entrance is free.

A Capers “market” with consequences; geopolitics a concern…