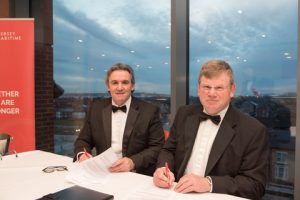 Two leading maritime organisations have joined forces to stimulate growth in marine, ports and energy business in the North.

Mersey Maritime and Team Humber Marine Alliance, representative bodies for the maritime sector, have signed a Memorandum of Understanding (MOU) aimed at collaborating and presenting a united front in the Northern Powerhouse initiative.

Chris Shirling-Rooke, Chief Executive Officer of Mersey Maritime said: “We are really excited to have signed this agreement with Team Humber Marine Alliance. THMA is an excellent organisation that has done a lot of good work in the marine and offshore sector in the Yorkshire and Humber region of the UK.

“Team Humber has the same vision as Mersey Maritime and by working together, sharing industry knowledge and best practices we hope to significantly increase activity and investment in the maritime industry across the two regions we represent.” 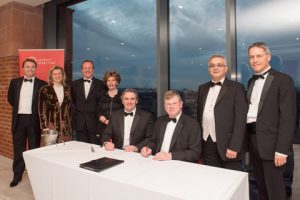 Mark O’Reilly, Chief Executive Officer of Team Humber Marine Alliance, said: “This agreement strengthens the offer of the North West and the Yorkshire and Humber regions. We are united in our mission to win more business for our members and our combined wealth of skills and capabilities are a force to be reckoned with.

“Both areas have made great strides with the transformational Liverpool2 and Greenport Hull investments and we want to capitalise on these opportunities, enhance the skills base and create sustainable jobs.”

It is expected that the initiative will encourage member companies to enter into joint ventures, catalyse innovation as well as increase access to funding and skills development.

The two organisations have been in talks since they were introduced in 2015 through a UK Northern Powerhouse trade mission visiting offshore wind regions and organisations in the USA. This initiative builds upon a growing relationship between the Humber and Mersey regions across academia, public sector and business.