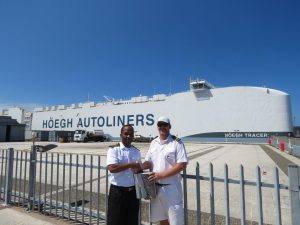 Marine Pilot Rainer Rauntenberg (right) who managed to the steer in an automotive vessel in rough weather conditions receives a gift from the Port of Durban Harbour Master Alex Miya.

[Durban, South Africa, 17 March 2017]  The cyclonic weather conditions which battered the Durban beach front earlier this week, did not stop the Port of Durban’s marine pilot Rainer Rauntenberg from safely steering an automotive vessel into the port on Sunday, 12 March 2017.

Rauntenberg, who has been a marine pilot for more than 14 years, successfully steered the vessel under adverse weather conditions believed to be caused by a tropical cyclone Enawo – which struck Madagascar last week. 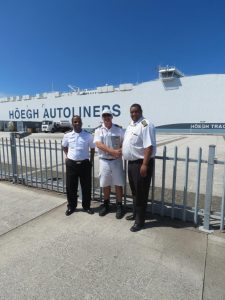 Port of Durban Harbour Master Alex Miya said: “The pilot’s bravery to safely bring in a vessel in high wind conditions and large ocean swells proves that the Port of Durban is always ready to service its customers and will not let adverse weather conditions delay vessel turnaround time, whilst adhering to maritime safety precautions.”

The wind speed on Sunday was recorded between 30 to 40 knots and is considered a very high speed wind which can create difficulty in manoeuvering vessels.

“It was challenging to bring in a vessel in such rough weather conditions but my focus was to make sure that it was safely berthed,” said Rauntenberg who has worked for the Port of Durban for seven years.

The dramatic video of a car carrier entering the Port of Durban on Sunday made its rounds on social media and received 14 500 shares and 547 000 views. TNPA has also uploaded the video to its YouTube channel at https://youtu.be/8BWvot2g7Gk

A Capers’ market is NOT a market, particularly amid explosive geopolitics…

RMT takes Save Our Seafarers 2020 campaign to SNP conference

No signs of crisis at LIQUI MOLY