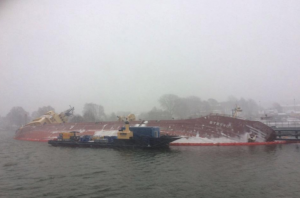 Ardent salvage crews successfully used a parbuckling method to right and refloat the cargo vessel, M/V Sternö. The vessel was resting with a 54- degree list with water ingress. “There were a lot of elements that we had to battle. The icy weather, the traffic on an active ship
channel, and making sure that we did all that we could to mitigate pollution risks, since the local
community’s water source intake was less than 200m away from the operations site,” said Johan Foks, Ardent Salvage Master.

The vessel was loaded with 1,400 tons of grain when it suffered a collision, and rested on a jetty structure with a 54-degree list.

Ardent cres were mobilized in late Feb. 2017, completed the operation, and delivered the
vessel on Mar 22.

“We mobilized salvage craft and equipment, connected three strand jacks to bollards on the
opposite side of the river to parbuckle the vessel,” said Johan Foks, Ardent Salvage Master.

“There were a lot of elements that we had to battle. The icy weather and the traffic on an active ship channel were big considerations,” said Foks. 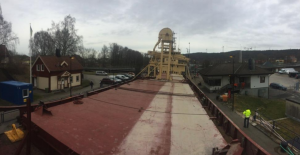 “The parbuckle operation corrected the list to 11 degrees, and then we lightered the cargo for
the refloating operation,” said Rob Rutten Ardent’s Naval Architect for the M/V Sternö.

“Once we pumped the water out of the engine room and holds, the vessel refloated and was
stabilized at a four degree list. We maneuvered the vessel through the locks and moored it
quay-side for remaining cargo discharge. The vessel was at a two degree list once we were finished,” said Rutten. 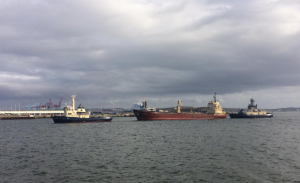 The Storno delivered by the Svitzer Bob and
Svitzer Bonden from Lila Edet to Gothenberg, Sweden.

By the Mar 22, the vessel was towed by the Svitzer Bob and Svitzer Bonden from Lila Edet to
Gothenberg, Sweden.

Ardent simultaneously refloated the M/V Skagern with a separate team, 7.5km upstream from
the M/V Sternö on the River Göta älv on Mar 9th.

H.E. the President of the Republic of Cyprus H.E. Nicos Anastasiades speaks at Capital Link’s event in New York