ESPO Conference 2017: register now and be part of this major EU port event! 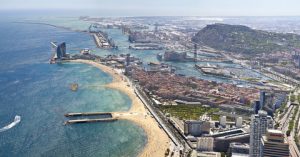 The European Sea Ports Organisation (ESPO) is inviting its members, policy makers and stakeholders to join the 14thedition of its annual conference, which will be hosted by the Port of Barcelona. The event will take place on 1 and 2 June 2017 in the World Trade Center, nicely located at the seafront and within a stone’s throw from the Ramblas.

Trust us, you do not want to miss this 14th edition. Here are six reasons:

1° The Theme:  ESPO opens the debate on what are probably the most challenging problems of today: the changing climate and the rising economic nationalism.

How to become a low-carbon port? How much time do we need for the energy transition? Are European ports and their infrastructure prepared for the storm? How far can a port authority go in enforcing low-carbon engagement?

How disruptive can new trade barriers be for ports? Is the business model of European ports changing? How to look at this rising economic nationalism at a time where the shipping lines, logistic operators and terminal operators are increasingly joining forces and setting up alliances? Should ports follow the example of their customers and join forces?

3° Professor Jonathan Holslag: “Globalisation is under threat. As economic recovery remains very fragile, nationalism is on the rise and new major wars loom. This is a moment for ports to reflect. Uncertainty brings a greater need for diversification and efficiency. Yet, ports too must reflect about how commerce can generate more tangible benefits for the societies they serve. Ports, after all, will only flourish as long as their hinterland thrives.” Are you also eager to hear more?

4° Many other remarkable speakers: two months before the event, a host of exciting and informative speakers are already confirmed and there is yet more to come. The confirmed speakers are:

These panellists will enter in a debate with the ports. The following port representatives are already getting ready for the debate:

5° The EcoPorts birthday cake: this ESPO conference will mark the 20th anniversary of the EcoPorts network, a network within ESPO gathering ports that are proactive in the field of environment.

6° The “Casa Llotja de Mar” (see picture below): for this year’s conference dinner, our host, the Port of Barcelona, is taking us to one of the most significant and splendid monuments representing the economy and culture of Barcelona, located on the seafront in the historical centre of Barcelona. It was built in the second half of the 14th century, the most brilliant period of Catalan Gothic. The antagonism of styles makes Casa Llotja a historical and artistic monument of immense architectural value. The halls and rooms are decorated mainly with 18th and 19th century sculptures and paintings made by students and professors of the Academy of Fine Arts.

So do not miss this conference, register now for the ESPO Conference 2017 and book your room as soon as possible in one of the conference hotels, if you want to benefit from the specially arranged rates. The ESPO Conference coincides with the start of the touristic season in Barcelona, so it will be quite busy!