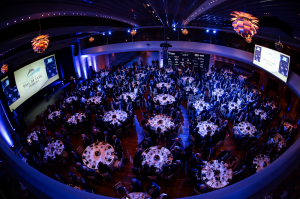 A panoramic view from the Dinner Hall

‘Hollywood at Sea’ auction boosts support for Hellenic Hope, thanks to generous bidding by shipping community

[April 6, 2017] Leading participants in today’s shipping industry gathered to pay tribute to some of the greats of Greek shipping’s past at the Greek Shipping Hall of Fame Induction Ceremony & Dinner 2017.

Highlights of the gala dinner event included the announcement of the Inductees for 2016 – George L. Daniolos and Nicolaos D. Lykiardopulo – who were remembered through interviews with family and warmly lauded by the 600 guests attending the prestigious event at the Megaron, the Athens Concert Hall.

A portion of the funds raised from the event was donated to Hellenic Hope, a charity that raises funds, primarily from overseas, to support carefully-selected projects in Greece that help children in need, focusing on children in socio-economically deprived areas and children at risk from the ongoing crisis in other ways.

Hellenic Hope co-founder Manos Papatheophanous said that the organisation has so far raised about €1,000,000 that has gone to help and assist more than 3,700 children. Hellenic Hope has supported 17 charitable organisations in Greece. “A warm thank you from us at Hellenic Hope to the Greek Shipping Hall of Fame, for supporting our organisation for a fourth consecutive year,” he said.

In addition to the Greek Shipping Hall of Fame’s donation, presented on behalf of the Hall of Fame by George Gratsos, chairman of the Hellenic Marine Environment Protection Association (Helmepa), the event included an after-dinner charity auction of four original artworks – each one a costume sketch used in the production of a historic film related to the sea.  Generous bidding by guests ensured that the ‘Hollywood at Sea’ auction exceeded all hopes, raising a further €37,500 for Hellenic Hope on top of the donation by the organisers.

Impressive industry support for the event was led by ABS, the Liberian Registry and Shanghai Waigaoqiao Shipbuilding Co. Ltd. the three Co-Lead Sponsors of the Induction Ceremony & Dinner 2017.

Vassilios Kroustallis, Regional Vice President, ABS, said that “The people we are honouring tonight exemplify leadership and embody the pioneering spirit that has defined the maritime industry for centuries. It is important that we recognise that innovation and advancement does not stop with them.”

According to Michalis Pantazopoulos, Senior Vice President of the Liberian Registry, Greek shipping’s relationship with Liberia goes back to the Registry’s foundation year of 1948. “The shipping ties between Greece and the Liberian Registry have become even stronger during the global economic downturn of recent years, founded on solidarity, trust and mutual support,” he said.

Sheng Jigang, President of Shanghai Waigaoqiao Shipbuilding Co. Ltd., emphasised the strong ties between Greek shipowners and shipbuilding in China. “SWS has delivered hundreds of high quality vessels to dozens of Greek shipowners which gives us precious memories.  However, we are not content to remember our past successes but instead we work towards a successful future with our clients through hard work and dedication,” he said.

TMS, which has become one of Greece’s largest shipping groups since it was established in 1986, sponsored the welcome drinks party for the event and TMS founder George Economou said a few words to welcome guests.

After the tragic loss of STELLAR DAISY, a quality and thorough investigation report will be needed quickly