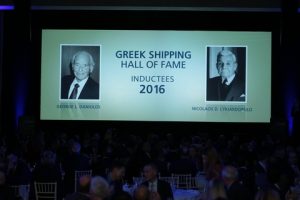 MARITIME lawyer George L. Daniolos and shipowner Nicolaos D. Lykiardopulo have been inducted into the Greek Shipping Hall of Fame.

The two historic personalities were revealed as the Inductees for 2016 in front of 600 guests at a special Induction Ceremony & Dinner held at the Megaron, The Athens Concert Hall.

GEORGE Leonard Daniolos was a prominent maritime lawyer and longstanding legal adviser to the Union of Greek Shipowners. His role in many of the critical issues affecting Greek shipping interests over many decades was recognised in the 1980s with the title of Honorary President of the Union.

Throughout his career, the native of Andros island practiced shipping and commercial law, representing many Greek shipowners as well as banks, insurance companies and P&I Clubs.

He was involved in 1943 in preparations for the purchase of the 100 Liberty ships by Greek owners with the guarantee of the Greek state in 1945, as well as in the formation in 1953 of the legal framework still applied today for the purchase, finance, and registration of Greek flagged ships.

NICOLAOS Dionysios Lykiardopulo originated from the island of Cephalonia and went to sea at an early age, becoming a captain at the age of 28. He never lost his empathy for seafarers but he enjoyed a long and illustrious career as a shipowner that spanned many decades and two world wars that twice decimated his fleet.

He was among the pioneers of Greek shipping in ordering new steamships and was also among the first to acquire tankers.

He was a prime mover for the creation of the Union of Greek Shipowners and in 1950 he was elected President of the Union, a post he held until 1960 when he turned 94.

Mr Lykiardopulo was widely admired for his humility and wisdom. His business achievements also included non-shipping milestones such as the creation of Piraeus Bank, the National Insurance Company of Greece, and a significant paper mill in Aegeon.

The many instances of his philanthropy included chartering a vessel in 1916 to transport food to the starving Ionian islands and devoting himself in later years to helping rebuild Cephalonia after the catastrophic 1953 earthquake.

The Inductees for 2016 will shortly be featured with full biographies and other media in the Greek Shipping Hall of Fame, which resides at www.greekshippinghalloffame.org

Voting for Inductees takes place annually and is open to members of the Greek Shipping Hall of Fame Academy, currently numbering about 300 members. The integrity of the on-line voting system and the results are overseen by the international audit firm, Deloitte.

An independent organisation established to bring the fascinating story of Greek shipping to a wider public, the Greek Shipping Hall of Fame has been paying tribute to leading personalities from Greece’s past shipping history since 2007.

With the addition of George L. Daniolos and Nicolaos D. Lykiardopulo, the Hall of Fame now includes 26 outstanding personalities of the shipping world.