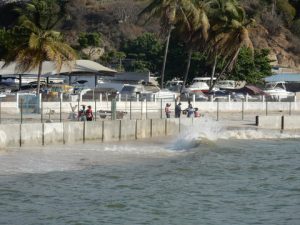 Eroding beach along the coast where reclamation is foreseen

Amersfoort, The Netherlands, 6 April 2017 – Royal HaskoningDHV has been awarded the contract for the detailed design of the Marginal da Corimba reclamation and shore protection project in Luanda, Angola. This major contract was awarded by the consortium of Urbinveste and Van Oord.

The growing number of inhabitants in the city of Luanda has driven the need to expand and provide solutions to alleviate current capacity issues, improve accessibility and stimulate economic development through investment in infrastructure.

New waterfront
Royal HaskoningDHV has been commissioned to prepare the detailed design for the 400 hectares Marginal da Corimba project, a large-scale waterfront development scheme in Angola’s capital city. The award builds on the company’s earlier involvement in the outline design phase of the project.
The new area will be created over a 10 kilometre stretch of coast in front of Luanda, and will serve for the construction of the Marginal da Corimba highway, as well as a fishery port, marina and land development.

Gertjan Schaap, Senior Project Director at Royal HaskoningDHV commented: “The main aim of this project is to improve life in Luanda, a city that faces huge infrastructure challenges caused by its rapid population increase. The new highway will reduce traffic congestion and the new fishery port will provide an improved and safe base for local fishermen – a vital trade in Angola.

“We are pleased to support the project and look forward to bringing our extensive industry expertise to the consortium. Reclamation projects such as this are undoubtedly vital to the local economy, and we will work to ensure that we enhance society for the parties involved.”

The detailed design stage is scheduled to be completed in January 2018. The consortium of Urbinveste and Van Oord expect to complete construction of the reclamation which was ordered by the Angola government, mid-2019.