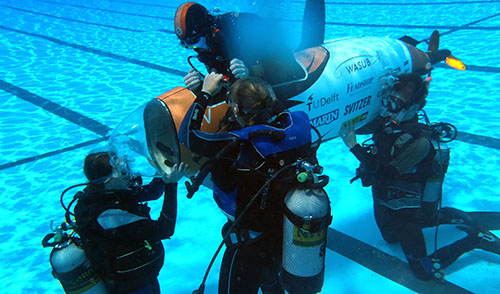 The IMarEST has announced that the fourth European International Submarine Races will take place over a fortnight from 2-13 July 2018, with QinetiQ, a defence technology company, as the principal sponsor for the event.

The races are a unique sporting and engineering challenge which involve teams from universities across the world designing, building and racing human-powered submarines around a slalom course at QinetiQ’s Ocean Basin, one of the world’s largest indoor freshwater tanks in Gosport, UK.

The team from the University of Auckland, New Zealand won the 2016 races with their Taniwha 2 submarine. Professor William Megill, who is the race director and also a professor of bionics at Rhine Waal University, highlighted the strengths of the winning team and their submarine: “They proved that the combination of innovation and attention to detail make all the difference. Their craft was driven to impressive, near record-breaking speeds, by a robust biomimetic propulsion system and a novel fish-inspired hydrodynamically efficient tail which replaced the rudder usually found on submarines.”

Some of the university teams that have already expressed an interest in taking part in eISR 2018 include:

If you are interested in sponsorship opportunities, please email samantha.carter@imarest.org.  You can find out more about the races at www.subrace.eu.