Pulsing with life-force and spirituality, this is as remarkable a collection of fine art as anyone is likely to encounter. A handsome volume that is a publishing milestone features marvels of rapture and radiance from 65 established and emerging artists of Australia’s Aboriginal and Torres Strait Islands communities.

Alongside the captivating artworks, on almost every other page of the glossy publication, entitled Our Mob, God’s Story are luminous, charming photographic portraits of the talented creators. Their faces exude the glow of humanity and the warmth of faith and intellect.

The 240-page, full colour book was formally launched on April 5 2017 (what more appropriate time than the Easter season?) at a ceremony at Prince Alfred College, Adelaide. It is published as part of the 200th anniversary celebrations of the Bible Society of Australia. 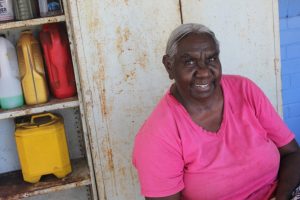 In short interviews, each artist professes his or her deep Christian faith. Their words are the more moving when one remembers the abuse – and trashing of their traditions – that the continent’s indigenous populations have suffered at the hands of missionaries who split up families, and of state and federal institutions.

Some of the contributing artists were when small taken away from their people. Violations continue:  in mid-2016 videos surfaced of prison guards beating young inmates including children at a detention centre in Darwin, Northern Territory.

Religion was used as a mask for oppression, but it has been the vehicle for the assertion by dignified members of Australia’s first nations of their unshakeable love for their fellow man.

The vibrant paintings are visibly in the main a heritage of more than 50,000 years of stories, songs and ceremonies of Aboriginal and Torres Strait peoples (the latter are from islands located between Cape York in Queensland and Papua New Guinea). Europeans have been in the southern continent for little more than 200 years.

Some of the 115 paintings in the book are influenced by European styles (reflecting the fact that their authors were raised in white homes), but many are rich in indigenous symbols of people, animals, stars, religious signs and sites, and even bush food such as honey ants and witchetty grubs. One page fascinatingly explains the symbols used in the paintings. 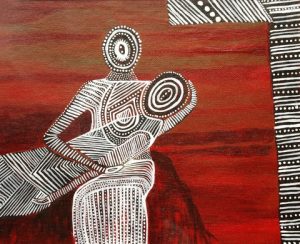 Among the works thus enriched are Australian stations of the cross by Miriam-Rose Ungunmerr of Daly River, Northern Territory. She writes in a foreword: “Our Aboriginal culture has taught us to be still and to wait. We do not try to hurry things up. We let them follow their natural course – like the seasons…. We wait on God too. His time is the right time. We wait for him to make his Word clear to us… I am beginning to hear the Gospel at the very level of my identity. I am beginning to feel the great need we have of Jesus – to protect and strengthen our identity, and to make us whole and new again.” 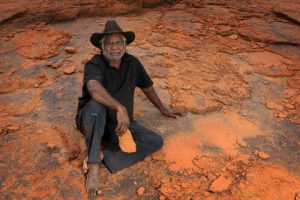 Each example of “art for God’s sake” is movingly explained and accompanied by a quotation from the Bible.

One of the paintings of Rupert Jack is Abraham. Rupert has been a priest for more than 20 years in Western Australia and Northern Territory. The Christian leader chose to paint the story of the Old Testament patriarch Abraham and his road to Canaan, the promised land.  Dots, circles and lines portray both Abraham’s physical journey and his journey of faith.

Safina Stewart is another prolific talent. In her Seven Days of Creation, each panel represents one day. Indigenous flora and fauna, and traditional art symbols bring out the Australian element. Day one begins as God speaks and creates day and night. The central pathway forms the cross of Christ. 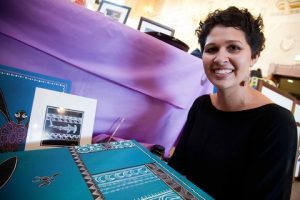 In Heaven Came Down Safina, of Wonthaggi, Victoria, has a hovering eagle reflect the imagery of the Old Testament prophet Josiah to represent those who gain strength through their hope in the Lord. In Wirundjuri country the eagle is the symbol for the creator of all things. This symbol is shown even more dramatically in Bunjil, which among the Kulin nations is the word for eagle, which incorporates other symbols for water (baptism) and circles for The Trinity.

Safina spent her early years in Papua New Guinea, and as a teenager in Australia began to investigate her Aboriginal and Torres Strait heritage. She comes from an artistic family and embarked on a career as an artist in 2007 when she began selling her work “and using it to reach people with the Good News of Jesus.” Safina adds: “I am convinced Aboriginal art is an extremely effective way of sharing the Gospel, both with non-indigenous and indigenous people.” 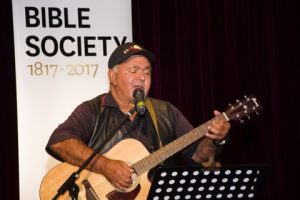 Among artists who came to the platform at the launch, Imiyari (Yilpi) Adamson –  from Ernabella, South Australia, and who has two paintings in the book (Wildflowers and Jesus Preaching from the Boat) – spoke in Pitjantjatjara and Paul Eckert interpreted for her.

One of those who entertained the gathering was Nelson Varcoe, who sang an original song. He has a painting The Way that Leads to Life in the book.

The ‘labour of love’ has taken seven years to compile with contributions from all the compass points of Australia, including Tasmania, the Torres Strait islands, and the Tiwi Islands off the Northern Territory. A Queensland government document says that Torres Strait Islanders are of Melanesian origin with their own identity, history and cultural traditions. Many of the islanders live on mainland Australia. 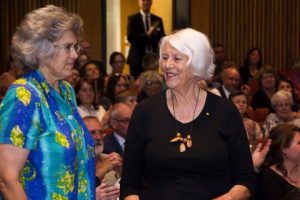 Underlining the cultural diversity they represent, the artists are from 41 language groups, which the book lists. Their endeavours, tender without being sentimental, will touch the hearts of both believers and non-believers.

The genesis of Our Mob, God’s Story was 15 years ago when an accountant, Glenn Goodwin, was left with a substantial gift for his care in administering an estate for a client. He believed God was leading him to donate to the Bible Society, and he wanted the donation to enable the Society to spread the Gospel through the work of Indigenous artists. He took part in the project, which included artists from his hometown of Moree, New South Wales.

Co-editors of the book, Christobel Mattingley and Louise Sherman, said that locating artists and their work had been a long process because they wanted to ensure that as many language groups as possible had the opportunity to submit paintings. “We wanted to be respectful and culturally sensitive in our approach, allowing time for relationships and trust to develop,” they write. “Artists’ work and their faith stories are very precious and we are mindful that they are sharing an important part of themselves.” In all they collected 300 paintings, from which the selection was made. 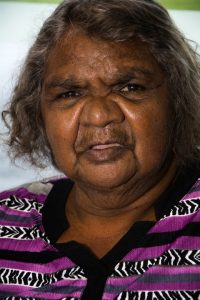 Christobel Mattingley is one of Australia’s most distinguished authors, having more than 40 years’ involvement with Aboriginal peoples and their history, which produced landmark books including Survival in Our Own Land: ‘Aboriginal’ experiences in ‘South Australia’ since 1836. Our Mob: God’s Story is one of more than 50 books, which include many engaging titles for children, she has published.

The writer of this review met this adventurous and prolific writer when we had separately booked a jeep tour to view the world’s largest mainland gannet colony, at Cape Kidnappers, Hawke’s Bay, New Zealand.

Two poignant entries in the book are the work of Yvonne Tjintjiwara Edwards. In 2006 and 2007 Christobel worked with Yvonne and other Anangu women to relate the devastating human costs blamed on British nuclear testing in South Australia. The result was the book Maralinga the Anangu Story, published in 2009.  Yvonne’s uncle, sister and husband had already died of cancer before Christobel met her, and soon afterwards two sons died of cancer and the two children of another son were born with genetic defects.

Yvonne had hoped to publish her own book, but became too upset to paint, and her sudden death, aged 61 in 2012, meant that for cultural reasons her story could not be told for two years. Christobel fulfilled as much as she could of her friend’s wishes by publishing in 2016 another book, Maralinga’s long shadow: Yvonne’s story. Yvonne’s painting Nativity reproduced in the latest publication from the 2016 book shows the holy family protected by rainbow serpents and goannas and surrounded by flowers and bush tucker. One of Yvonne’s featured paintings, Three Crosses, was composed rapidly for a reconciliation service in Burnside, a city suburb of Adelaide.

Already some schools plan to use the new book as a visual resource in teaching Aboriginal culture, an element of the national curriculum.

Bible Society Australia, the oldest surviving organisation to have been established by the British ‘newcomers,’ says that proceeds from the sale of the book will go towards the publication of indigenous scriptures in native languages.  None or only small portions of the Bible are published in some mother tongues. The society is committed to giving access to the Bible across the world, and provides free Bibles and scripture portions to mission groups, chaplains of hospitals, prisons and defence forces.

The Rev Tim Costello, chief advocate at the community development association World Vision Australia, said: “The first Australians clearly had a deep understanding of spirituality long before Captain Cook arrived. The book’s powerful expressions by indigenous artists – beautifully woven into their own narrative – help us celebrate our diversity and our common faith.”

Information on availability of Our Mob, God’s Story is on the Bible Society’s website, www.bibleshop.org.au