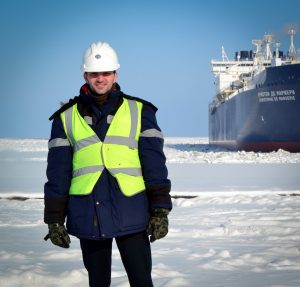 Murmansk & Sabetta, Russia, 11 April 2017 – GAC Russia has marked an important milestone with its successful handling of the first LNG carrier designed to withstand harsh Arctic conditions at the icy Russian ports of Murmansk and Sabetta.

The “Christophe De Margerie” is the world’s first specialised LNG ship in the reinforced ice Arc7 class, and the first of a fleet of 15 designed to export liquefied natural gas from Sabetta to European and Asian markets.

Ice trials
When it arrived in Murmansk for its ice trails in the Kara Sea, GAC Russia provided the vessel with a range of services, including: obtaining its permit to operate in Russian territorial waters; boarding engineers and scientists for the trials; delivering equipment and supplies on board; coordinating her route with the Russian Coast Guard Service; and providing valuable advice on navigation in the Arctic. Once the trials were concluded, customs and border formalities were completed and the ice crew disembarked. GAC Russia also handled safe passenger operations in Murmansk, arranged bunker supplies and delivered machine parts and ship supplies.

New era
The ship then set sail for her first call at Sabetta, on Yamal. The port is dedicated to exports of gas and gas condensate from the South-Tambeyskoye gas field and home to a natural gas liquefaction plant to prepare the raw hydrocarbons for transportation by sea. Commercial shipments are expected to commence before the end of this year.

Tatyana Shorokhova, GAC Russia’s General Manager, says the expertise of GAC’s team at the port was an integral part of the successful preparation and implementation of the high profile maiden call of the first ice LNG carrier to the port.

“This was an important milestone, both for us and for the country, and one which attracted considerable media attention,” she adds. “We believe that this is the start of a new era for Sabetta, and we look to forward with confidence to the part that we will play in that future.

“GAC Russia will be at hand when commercial shipments start to provide the world-class professional agency services and other support, thus further strengthening our position in the Arctic.”

Brexit: Macroeconomic implications for the UK, the world economy & Greece