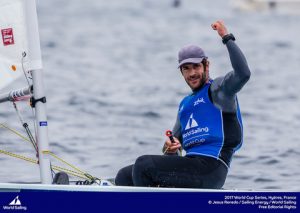 Cypriot Laser sailor Pavlos Kontides who once again stole gold from underneath the nose of his rival.

It was a case of déjà vu on the final day of racing at Sailing’s World Cup Series in Hyères, France as Cypriot Laser sailor Pavlos Kontides once again stole gold from underneath the nose of his rival.

On the second day of live Medal Racing from the south coast of France, it was the turn of the One and Two Person Dinghies to have their day. And the action didn’t disappoint.

A colder, overcast day with a steady 8-12 knot breeze did nothing to dampen the spirits of the final few lucky World Cup Series medallists.

Pavlos Kontides (CYP) must have been sitting on the start line of the Laser Medal Race thinking, ‘I’ve been here before’. 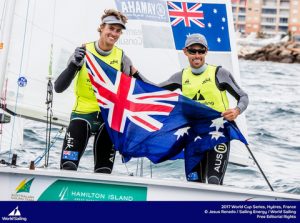 At the 2016 World Cup Final in Melbourne, Kontides went in to the final race in second overall fighting for a gold against Australia’s Matt Wearn. He won that battle and the gold. This time around, the job at hand was the same, the only difference was Italy’s Francesco Marrai was now in his way. The result? Well that was the same, gold for Kontides.

The Cypriot may walk away from Hyères, France with the Laser title, but it couldn’t have been closer. Kontides and Marrai finish the regatta level on 63 points. In the end it came down to the Medal Race result, and Kontides knew this, “It was a battle out there and I was in second or third. Francesco managed to pull himself back up to fifth but I knew my current position would give me the win. I got overtaken but then got my position back in the downwind and that got me the gold. It was close racing.” 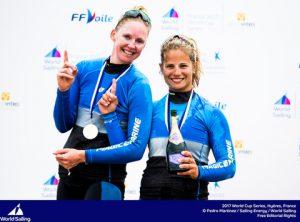 The battle commenced at the start, as Kontides explained, “I wanted to start under Francesco, even though I wasn’t sure if the right side was paying. About a minute in I managed to get my bow in front, he started to pick up some bad wind and had to tack. From that point, it was game on.”

Game on it certainly was. Rio 2016 Olympic gold medallist Tom Burton (AUS) would go on to claim victory in the Medal Race, but Kontides claims Hyères gold.

The man that Kontides battled in Melbourne, Matt Wearn, had to settle for bronze medal and secured it with a sixth place final race finish.

In the Laser Radial Belgium’s Evi van Acker was safe in the knowledge she could not finish any worse than in silver medal position. But silver isn’t good enough for the determined Belgian and she was focused on gold.

The only sailor that could catch van Acker was Tuula Tenkanen (FIN). Van Acker always had rival Tenkanen in her sights and set out for a fight as she explains, “Today was an interesting race as I knew I had a silver and just had to defend a gold. That was the focus of the day, trying to defend against Tuula which meant we had a bit of a Match Race at the start. 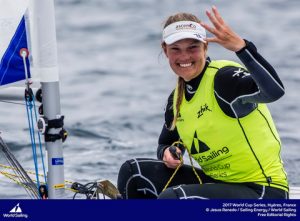 “There were a lot of penalties given but for both of us I think it was quite exciting. I managed to get a good start compared to her and because of that I always felt in control.”

Finishing just ahead of van Acker in third place was France’s very own Mathilde de Kerangat. That finish meant she had secured herself a bronze medal in front of her home crowd.

When does finishing in last place feel good? At World Cup Hyères, when you win your first gold medal.  That was the case for Turkey’s Alican Kaynar in the Finn class.

“This is my first World Cup win so I feel great,” said the Turkish sailor, “I started the season very well and now I have won here. We head to the Europeans next week so I feel great off the back of this.”

Hidden under a smile, you could see a sense of relief in Kaynar’s eyes. That relief came from a lot of time, effort and perseverance, “It is my first major regatta win and it’s just so good to know hard work pays off.”

Nicolas Heiner (NED) has been there or thereabouts all week in the Finn. A ninth place finish in the Medal Race meant that the Dutch sailor had to settle for silver, and in turn took the pressure of Kaynar allowing him to claim that maiden win. 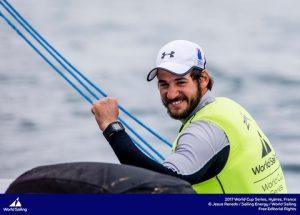 Winning the Medal Race, Jonathan Lobert (FRA) secured another medal for the home nation as it took him in to bronze position. Recovering from knee surgery, the Frenchman will be happy to come out of Hyères with his body unscathed and with a medal around his neck.

When the going gets tough, some teams have the ability to just get the job done. Rio 2016  Men’s 470 silver medallists, Mat Belcher and Will Ryan (AUS) rose to the top when others around them were struggling. With a string of four race wins in a row handing them the gold with a day to spare, the Aussies could have sat back and basked in the glory. Instead they went for the jugular and claimed a fifth straight race win in the Medal Race.

On paper the gold look liked a walk in the park, but for Belcher it was anything but, “The one thing I love about this class is the strength and depth throughout which always gives us good racing. We had a great scorecard this week but we have had to fight for every metre.

“It’s one of our first events back after Rio so it was great for me and Will and we look forward to building on this through the year now.”

The two teams that pushed Belcher and Ryan the most were Carl-Fredrik Fock and Marcus Dackhammar (SWE) and Panagiotis Mantis and Pavlos Kagialis (GRE). The Swedish team claimed silver and the Greeks recovered from a disastrous fourth day to keep hold of bronze.

Despite the victory, Zegers first thoughts were on improvement when she reached ashore at the end of the day, “We didn’t have a good race because we had a good start. But I am happy that we stayed cool and just did our best. If I look back at the whole week I am happy with the things that we have improved and happy with the things we know we still need to work on.”

Zegers and van Veen crossed the line in fifth position in the Medal Race, but with a gold medal all but confirmed beforehand, the result wouldn’t hurt as much. The same cannot be said for Great Britain’s Amy Seabright and Anna Carpenter. The Britons came in last place, and with it the chance of a medal slipped away.

The medals instead went to Silvia Mas Depares and Patricia Cantero Reina (ESP) who claimed silver and Linda Fahrni and Maja Siegenthaler (SUI) who took bronze. Finishing on equal points, the Spanish team stand one step higher than their rivals on the podium thanks to a third-place Medal Race finish compared to the Swiss teams eighth.

As all the winners spray the champagne, wave to the crowd and collect their medals, focus will now shift to the 2017 World Cup Series Final in Santander, Spain this coming June.