Government support for Thordon bearings with “Build in Canada” award 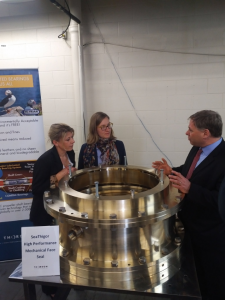 The Government of Canada has signed a procurement agreement with Thordon Bearings for the supply, installation and commissioning of two SeaThigor shaft seals for the Canadian Coast Guard vessel CCGS Hudson.

The product and service contract is through the Administration’s Build in Canada Innovation Program, introduced in 2010 to support and invest in home-grown innovations in order to facilitate sustainable economic growth across the country.

Announcing the contract last week at Thordon’s production plant in Burlington, the Honourable Karina Gould, Minister of Democratic Institutions and Member of Parliament for Burlington, explained that more than $80 million has been awarded in over 200 contracts since the program began.

Speaking on behalf of the Honourable Judy M. Foote, Minister of Public Services and Procurement, she said: “Innovative companies like Thordon Bearings Inc. are the backbone of our communities. Through the Build in Canada Innovation Program, the Government of Canada is helping them get their innovative goods and services from the lab into domestic and international markets.”

Steven MacKinnon, Parliamentary Secretary of Public Services and Procurement, added: “Our government is committed to growing the economy and the middle class, and helping those working hard to join it. By matching innovative products such as the SeaThigor seal with government needs, the Build in Canada Innovation Program helps Canadian companies move their products from the testing phase to the market place.”

Essentially, the program helps Canadian innovators land their first sale and get their innovations tested by the Government of Canada. In Thordon’s case, SeaThigor will be tested by Fisheries and Oceans Canada and the Canadian Coast Guard and marks the first commercial sale for the safe, maintenance-free seal since its market introduction in September 2016.

Terry McGowan, President and Chief Executive Officer, Thordon Bearings Inc, said: “We are delighted to have been awarded this contract under the Build in Canada Innovation Program and that the first commercial installation of SeaThigor will be on the CCGS Hudson. The Build in Canada Innovation Program made this possible and allowed us to gain a big reference to help us sell these seals to worldwide marine markets. The innovative ‘safe return to port’ seal was designed in Canada and is the only Canadian-made marine shaft seal now on the market.”

Officially unveiled at Hamburg’s SMM exhibition, last September, the SeaThigor forward seal has been cited as “raising the bar in dynamic and static seal design”. It incorporates an ingenious secondary seal module to provide Safe-Return-To-Port capability in the event of a face failure of the primary seal.

The seals will be installed to CCGS Hudson later this month at the Heddle Marine facility in Hamilton, Ontario. The vessels will also be fitted with Thordon’s XL propeller shaft bearings and the Thordon Water Quality Package.