Only Connect: Between Time and Place. 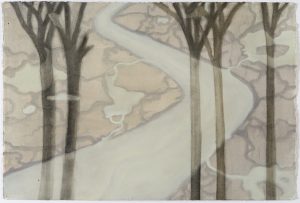 Only Connect: Between Time and Place. Perceptive paintings by Caroline McAdam Clark

Ethereal visions of coast, rivers, land, sky and elegant birds of the air are captured by Caroline McAdam Clark in her new solo London exhibition.

She sees the winding rivers, now tranquil but once bustling with trade, of her beloved Suffolk as the domain of sometimes solitary birds and of sparse and delicate plant life. 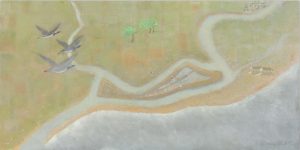 Flying north over Orford Ness. Oil and pencil on panel

In this show, at the Piers Feetham Gallery in Chelsea from May 18 to June 17, 2017, Caroline casts a subtle, incantatory spell in her interpretations of scenes with which she has been long familiar and places much further afield.

She reflects in this rich conspectus on “the cyclical nature of day turning to night and back again, the seasons, the effect of the weather on the sea surface, the interaction of moon and tides and one’s own sense of mortality as time passes.”

This transmutes into an awareness of migration. “The migration not of peoples but of birds, connecting as it does with crossing great landmasses at certain points during the year. Birds that cross thousands of miles from the Arctic to the southern hemisphere following the sun. Birds that travel only so far as they need to get from a cold and inhospitable 60 Degrees latitude to southern Spain to winter there and then head home.” 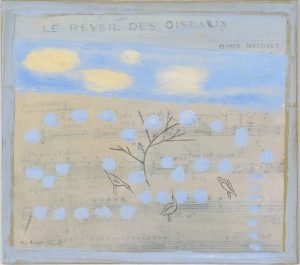 She has a cartographer’s perspective: “I love maps and the sense that by simply looking at a map or a chart one is already travelling in imagination. I notice that I often paint landscape as if hovering above it, like a bird. A bird’s eye view but with the human need to organise what I see into longitude and latitude.”

This frame of reference is memorable in her paintings of migratory flight over Orford Ness. Who among today’s visitors would suspect that Orford was a considerable port for wool, dairy produce and coal until winter storms and silting blocked it from the sea.  In the 20th century, Orford Ness put up with the raucous roles of military aviation and ballistics testing, until the Ministry of Defence sold the shingle spit to the National Trust.

Caroline conveys with instinctive sympathy a sense of the languorous, unruly course of the River Ore and its fragile ecosystem.

The Ore is with the Alde one stretch of water flowing by the towns of Orford (22 miles from Ipswich) and Aldeburgh (now famed for its contemporary musical associations, and custodian of a history as another leading port – with an important shipbuilding industry).

In a fine description in Suffolk magazine in February 2014 of the landscape, author John Grant wrote: “Somewhere, at some imperceptible point out there amid the flatlands, amid the vast and almost featureless sweep of marsh, crop and grazing pastures that lie between the town and the village, the Alde becomes the Ore.” 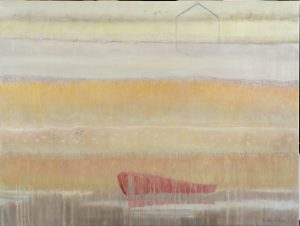 Sound of the River. Oil on canvas.

Caroline enjoys observing the waders at low tide beside the River Alde, “sometimes overnighting on a small yacht to hear the curlews’ mournful call; and in September or October, to watch the skeins of geese pass overhead apparently heading south.”

This keen interest in the birdlife of coast and river “has, by a strange connecting thread led me to Messiaen and his idea that he could transcribe birdsong into music.” Olivier Messiaen (1908-92) was both a composer and ornithologist and lavished birdsong transcription on his music, in works such as Réveil des oiseaux, a 1953 orchestral piece celebrating the calls heard in the sub-alpine mountain range, the Jura.

Like the French composer, Caroline seeks to fashion imagery that suggests birdsong-like notation. “After all, if one can suggest silence in a painting why not sound?” This comment brings to mind another composer: one who owed much to the Suffolk landscape. Benjamin Britten, who wrote what was called a church opera, Curlew River, is closely associated with the area. 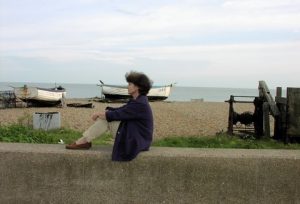 Such expressive concepts lift the restraint and austerity that is touched on in some of Caroline’s paintings. In fact, her muted tones embrace that rapture of place and time to which she aspires and which have pervaded what she has shown in previous exhibitions such as that following a road trip in Arizona and Colorado, and in another inspired by BBC Radio shipping forecasts.

Place is, for Caroline (who is of French-Scottish background), “where I feel most rooted: the East Anglian coastal edges and marshlands but also elsewhere when I go in search of new stimuli… to me they all connect.”

“Place is often where I begin. The marshes of East Anglia, the vastness of the Arizona desert, the bleakness of a Scottish island, all faithfully recorded. But it is also what gives me the tangible imagery to stray into the world of the imagination. 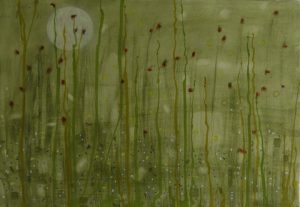 “By allowing such connections to happen, such influences to inspire, such natural phenomena to excite, with luck I can take wing and transcend the tangible ‘subject’ and enter an area that is somewhere between time and place.”

A variety of medium – oil, oil and pencil, gouache, charcoal – are used for the artist to take wing, or allow the birds to sing; and all are definitively in a style that identifies this practitioner as discerning and ingenious. 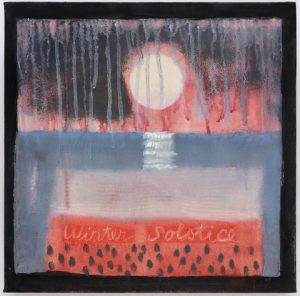 DVB Bank Group posts results for the first quarter of 2017