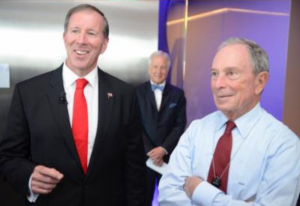 Hamilton, Bermuda, May 18, 2017 – Business billionaire Michael Bloomberg told a gathering of senior US business leaders that Bermuda plays a special role in the global economy.

The three-term former New York mayor and founder of Bloomberg LP made the comment at an invitation-only forum Wednesday at Bloomberg headquarters, co-hosted by the Bermuda Business Development Agency (BDA). Titled “The Future of International Business Deals: How to Position for Long-Term Growth,” the awareness-raising event brought together more than 150 senior US business leaders for in-depth panel discussions on issues important to the Bermuda market.
“Our company is always looking for ways to give people the information they need to make smart decisions and fuel growth, and one of the things we’re trying to do is bring people together to share ideas and learn something,” Bloomberg said.
“The island plays a special role in the global economy; it helps to fuel growth and support jobs through trade and investments, so we have stake in Bermuda’s growth and also in some of the changes that are taking place in the world,” he noted, adding he has owned a home in Bermuda for more than 20 years.
Bloomberg introduced Bermuda Premier Michael Dunkley for a live, half-hour interview that launched the three-hour afternoon event aimed at raising Bermuda’s profile among New York-based corporate executives. Premier Dunkley’s question-and-answer session with Bloomberg Editor-in-Chief Emeritus Matt Winkler was staged before an audience of asset managers, hedge fund, private equity and institutional investors, and was streamed on all Bloomberg terminals.
Their conversation covered the attraction of Bermuda to foreign investors, the island market’s growth, high performance and recent diversification, and the safe harbour Bermuda offered amid geopolitical uncertainty triggered by Brexit and possible tax reform by the US Trump Administration.
“Foreign acquirers spent $9.55 billion, a record amount of money at least in the past 12 years, for assets in Bermuda last year,” said Winkler, noting there were 25 Russell 3000 Index members currently domiciled in Bermuda, with a total market capitalization of $91 billion. “The 39.4-percent premium the buyers had to pay was also the highest. So, the value of Bermuda is going up; it’s at an all-time high.”
Finance Minister ET (Bob) Richards and Minister of Economic Development Dr Grant Gibbons attended the event, along with senior representatives from Bermuda’s international business sector.
“It’s an honour to have the opportunity to be at Bloomberg headquarters and to have the former Mayor introduce the event,” said the Premier. “The opportunity to talk about Bermuda in front of a first-class audience, with good panel discussions, and an awesome opportunity to network. It raised awareness and it’s clear people are excited about Bermuda.”
Premier Dunkley’s interview was followed by panel discussions examining transformative forces impacting the global business landscape, including changes to regulations and tax policies.
“This event was a prime opportunity to heighten Bermuda’s profile as a top-tier jurisdiction and raise awareness about what our market offers US corporations,” said BDA CEO Ross Webber. “The high-profile nature of this forum, with the added benefit of Mike Bloomberg’s personal endorsement, has considerably strengthened awareness of Bermuda and differentiated us from other offshore domiciles.”
The afternoon’s first panel examined the effect of impending US tax reform on global investments, including global capital flows and the ways deals are structured and implemented. Panellists discussed ways investors could optimise their transactions and pursue strategic acquisitions. Featured speakers were: Kristi Kuechler, President, FOX Private Investor Center; Rodney Lawrence, Global Head for International Tax Services, KPMG; and SivaSubramaniam, Tax Partner, International Tax Services, PwC.
A second moderated panel discussion looked at global regulatory changes and what overseas jurisdictions like Bermuda offered US-based companies considering foreign direct investments. Featured speakers included Howard Mills, Global Insurance Regulatory Leader, Deloitte; Torsdon Poon, Transaction Tax Leader, Ernst & Young; and Mark Strefling, General Counsel and COO, Whitebox Advisors.
Panellists explored how global businesses could take advantage of international opportunities in a safe harbour such as Bermuda amid current geopolitical and macroeconomic uncertainties.
Earlier, the Premier and Webber met with Kathryn Wylde, President of the Partnership of New York, a non-profit organisation whose members comprise corporate leaders from top companies in the US. They discussed their respective markets, including Bermuda’s renewed growth and innovation, ways the island could help global corporations, and potential opportunities for more US-New York business synergy.
BermudaBermuda Business Development Agency (BDA)Hamilton
0 comment
0
FacebookTwitterLinkedinEmail