The BDI@878: Tempest ante portas and climate change in tatters…

The BDI lost its 900 point-base threshold and things as you understand are becoming grave for the hoi polloi; the geopolitical issues with the president Trump’s position can cause tsunamis. John Faraclas’ mid-week market and geopolitics recap:

The loss of the 22 points from the BDI grounding same below the 900-point threshold comes here at no surprise and emotion, as we had numerous times warned and still warn that the era of Shipping for the very very very few is here – the ante portas was back in the year 2000, but few got the message!

The BHSI lost six points and now the Handies at 455 are becoming another liability.

The Container trade is doing its best to raise its profile; all means are being used for this purpose, but the harsh reality remains. Except the mergers and acquisitions of some mega box-companies, wonder what might happen to them if small entities find a leader and corner them in the …usual way… Caution, as big and medoum is not always beautiful!

The Wets, once again with mixed feelings; the last published BDTI (Dirties) and BCTI (Cleans) stood at 785 – minus 22 and at 556 plus seven respectively – a nice plus given the red colour all over the main indices.

New technologies are being introduced and I am afraid very soon many ships will look ….at best, obsolete. Renewal right now a must. Ignore the overcapacity “factor”…

The price of WTI below the US$ 49 mark, at US$ 48.78, not bad given our views fro the poor masses. Add whatever might happen with shale oil and gas. Now, seriously, can you imagine the Americans pricing and selling at US30 what’s gone to happen in the Arabian peninsular and surrounding region, AND beyond. Add a possible ”hiccup” with the ASE (Alternative Sources of Energy) and see what’s coming up…

On the Geopolitical front, we stress the fact that president Trump is about to quit from the Paris accord of 2015 when 195 out of 197 nations (Syria and Nicaragua abstaining) have committed themselves… No surprise at all…, but you never ever know what’s Trump’s next twist and turn!!! Putin’s Russia is  lifting some sanctions with Turkey. CAUTION!!!!

All other fronts – MIGRANTS with rising levels moving around and deaths/drownings on the rise, the Wars in Syria and Iraq with no end in sight, BREXIT and the forthcoming elections next week in the United Kingdom, the EU mess in all fronts, Greece’s despicable harassment by the Germans, the European Union and others from within, Turkey continuing to violate all areas its borders with – today dozens of intrusions by turkish jets, and others issues which we constantly mention in our reporting, remain the same with terrorism still creating havoc worldwide.

In Greece the shipping factor remains dominant and surges in the world of media; pleased to read Evangelos M. Marinakis’ successful bid for ailing DOL. Shipping and the medium is the means – you dead well know what I mean! 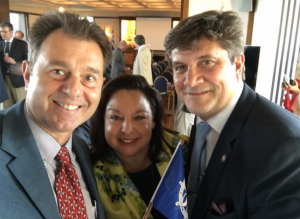 On another tone, we watched live –  thanks to George Xyradakis’ live video, the Propeller Club’s,  Port of Piraeus election results announced by  the very eloquent …Chian Nadia Zorbas.  XRTC’s George Xyradakis, and current president, come first with 116 votes; three managed to go as close as possible to the 100 point-level (in alphabetical order) Constantine Kontes, Dimitrios Patrikios and Kostas Rokkos) obtaining 90 votes each, and a powerful woman’s presence: Zoe Lappa-Papamatthaiou clinched 89 – the Cinderella (per George Xyradakis comment) did more than well. Congrats to all and we look forward to a better streamlining and furthering of this unique Propeller Club, which in comparison look having THE lead among Propeller Clubs worldwide. Will now await the new presidium to be announced!

Tomorrow WISTA-Hellas’ members are travelling to Madrid, in Spain for WISTA-MED and WISTA-Spain Annual Meeting 2017. We look forward advising you of yet another milestone from WISTAs.

Have a nice evening and be on guard from any eventuality deriving out of Pirates and terrorists attacks worldwide!!

The indices John are by no means a true indicator of the markets. The markets now move up and down also by those that handle the “paper”. The fundamentals are encouraging solely because the increase in grains to China as well as the increase of the standard of living in India which is yet one more locomotive. We ought to watch the rest of the countries and not only our tiny Greece. It is not the Germans that “did it” to Greece but rather our incapable politicians that can’t make the right decisions so that FDI increases to the point of creating jobs for the young – mainly – but what do we the elders do?