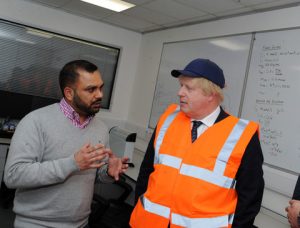 Boris Johnson’s timing was no coincidence. The International Maritime Organization’s Ballast Water Convention finally enters force on September 8 this year, triggering a five to seven year period over which thousands of vessels will require the installation of ballast water treatment systems as the regulatory deadlines for compliance fall due. 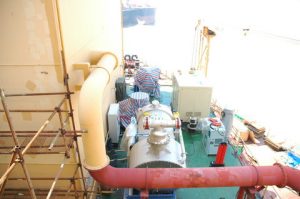 Andrew Marshall, Coldharbour Marine’s CEO, told the Foreign Secretary that the company’s strategy is to focus on large vessels for which other treatment systems based on ultraviolet or chlorination technologies, for example, are not always suitable. Indeed, he said, Coldharbour Marine had been the first company to install a working system on a VLCC, in 2012 which demonstrated that the BWT systems would operate successfully without disrupting any aspect of the vessel’s normal commercial operations.

The majority of large existing vessels in the company’s target range are owned outside of the UK, while Mr Marshall said that new tankers, bulkers and gas carriers are almost all built in China, Japan or South Korea, meaning that the company’s business will be entirely export-oriented. However, he emphasised that Coldharbour Marine’s suppliers are virtually all local manufacturers with sites within a 50-mile radius of the company’s Linby plant.

Unlike most other systems which treat ballast water during ballasting, Coldharbour Marine’s technology is based on using a marine Inert Gas Generator to treat the ballast water during the voyage, without the use of in line filtration. This has several clear advantages for vessel operators, Mr Marshall pointed out, including the fact that there is no potential disruption to cargo operations through filter blockage or system failure which would otherwise result in delays and significant extra costs for vessel operators. In voyage treatment also eliminates the risk of marine organism re-growth, even on the longest ballast legs, he added.

By selecting a technology based on inert gas, Mr Marshall believes that tanker and LNG crews will have no difficulty in successfully adopting, operating and maintaining the Coldharbour BWTS equipment, given that most crews will already be familiar with this. Moreover, the technology is green because it does not require the use of any “active substances” such as sodium hypochlorite (bleach), chlorine hypochlorite or ozone.

Coldharbour Marine Limited is a UK-based design, engineering business with nearly four decades of inert gas and water treatment experience. The company has a long history in the inert gas generation sector, and has in recent years developed Sea Guardian™ – a clean, green, compact “third generation” technology for use in LNG carriers and large tankers.

Key features of the GLD™ system are that treatment takes place in-tank and in-voyage and without the need for any form of in-line filtration. This approach ensures no disruption to terminal operations during ballasting and no risk of re-growth of marine organisms on long ballast voyages. With the GLD™ system, large vessels are now guaranteed to arrive at terminals ready to load or off-load ballast without the risk of delay caused by BWTS operational difficulties.

The system is fully type-approved by IMO, with testing undertaken by both the UK’s Maritime and Coastguard Agency and Lloyd’s Register. It also has US Coast Guard Alternate Management Systems acceptance and is currently undergoing the full US Coast Guard type approval process.