Refit of the mega yacht Ulysses delivered in record time 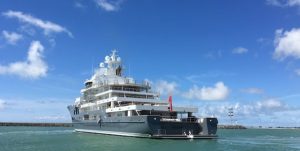 La Rochelle, 2 June 2017 – Compositeworks, a leading shipyard specialising in complex superyacht and megayacht refits, has just completed its first project at La Rochelle since taking over the Atlantic Refit Center in September.

Carried out in close collaboration with the owner representatives, Manta Maritime, the refit of the 107 metre expedition yacht Ulysses, was delivered to its owner in a record time of 3 months and within budget.

The main works, that begun end of February, involved a complete hull fairing from unfaired and topcoating by Rolling Stock, with results that exceeded Icomia standards. At the same time, several technical and aesthetic optimisation projects were carried out such as handrails, new crew quarters and VIP balconies.

All of this work brought together directly more than 170 people, including 40 crew members, for 3 months representing a significant flow of activity for many local companies in La Rochelle.

—————————
About Compositeworks
Ideally located in the South of France and now on the Atlantic coast at La Rochelle, Compositeworks is an award-winning shipyard delivering world-class yacht refits and complex rebuilds. Since it’s inception in 1998, CW has delivered over 800 projects, managed refits for over 25% of the world’s megayacht fleet (over 85m) and forged an international reputation for exceptional service, technical knowledge and timely deliveries.
Compositeworks’ international team of over 120 professionals have combined yach