The BDI (Baltic Dry Index) lost another ten points since yesterday and now reads 855 becoming a liability for all stakeholders, despite the fact that in Feb’16 we have seen the BDI shrink  down to 290 points… The Geops are advancing fast towards a major collision between all despicable players, thanks to the politicians, diplomats and the business cronies of the mega architects of this downwards going Planet Ocean. John Faraclas daily recap:

The Panamaxes …enjoyed another plus day with the BPI gaining 35 points and standing at 938 – not bad eh!

The Wets after a long time of continuous fall did well today; the last published BDTI (Dirties) and BCTI (Cleans)  stood at 705 – that six points up, and 522 – that’s seven points up too respectively.

The WTI as  these lines are written stands at US$ 44,44 !!!! CAUTION as except the benefit for the poor masses it might trigger other unwanted situations…

The Geopolitics are going down the road  and never ever before we have witnessed such a mess all over Planet Ocean:

The MIGRANTS still on top and remains the most important issue…

The Wars in Syria and Iraq take a major twist; ultra caution must be observed there as things might soon NOT be contained!!!

Turkey is haunting witches all the time; now we have the 12 (twelve) bodyguards of president Erdogan who are all served by an international arrest warrant from the USA authorities for their behaviour against Kurds demonstrating peacefully during Erdogan’s last visit to the USA… Within Turkey the arrests continue against all enemies of president Erdogan. Turkey gets now heavily involved with the Qatar issue and it remains to be seen what next in this strange appetite…

In Greece things might look better given an agreement reached for the next tranche of Euros 8,5 billion to advert another crisis in coming July when Greece has to meet a 7 billion repayment of loans… And afterwards, what?  Let’s see what the IMF will do and its eloquent  director Christine Lagarde… I guess the situation on this …day after is more than critical.  Greece cannot live in an unending austerity…  Will await and see as the Greek public had enough! Many things are still at stake; CAUTION  Turkey continued its violation of Greece’s airspace… CAUTION as you never ever know what will happen.

Still no white smoke from 10 Downing Street vis-à-vis the deal with respect the DUP’s final agreement with Mrs. May’s Tories. The BREXIT discussions though begin, hopefully, on Monday… Let us hope that the United Kingdom gets its act together and hope the media stop messing about – you dead well know what I mean. Meantime we all know and have witnessed many decades know Labour’s policies in all front. Indeed there are skeletons in the cupboard of all parties, the Labour has just one more…

At the other side of the Atlantic president Trump might face difficult personal issues too and no one knows what is going to happen; the shootings in Alexandria Virginia near Washington D.C., must me thoroughly investigated. It mustn’t happen again! Lastly, we wonder what is all about the president is being probed for obstruction of justice. Too many issue add to the American peoples lives and all together they already affect the world!

In the Fareast, it seems China is in turmoil. The figures don’t add and caution should be observed.

In Afghanistan, the explosion of the mosque in Kabul by ISIS  terrorists might create more problems. Caution and brace for more trouble there…

In Southern African and in particular in Lesotho the prime minister’s wife was shot dead; will await the motive behind this despicable action ending the life of Lipolelo Thabane…

There will be more news tomorrow in our weekly recap!

On another tone now, the Pireas 2017, the 6th Global Shipbrokers Forum was more than a great event at Athens’ Metropolitan hotel with three full sessions on: “Bankers and Financiers”, ” Shipbrokers and Shipping Analysts” and “Shipowners, Shipmanagers and Charterers” were the discussions were centred on: Shipowner’s View of Today: How they invest, Where they focus, How firm are their investing decisions? Opportunistic Approach? Asset Play? Cargo side’s View of Today’s Markets. Are we aligned, is it still charterers market? China slowdown? Commodities demand supply?

Will revert with a full account on all the deliberations of this great event. Tomorrow the gala at the Glyfada Golf Club. Be ready for strong discussions; not just networking… 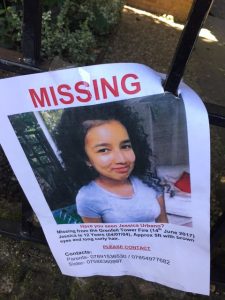 One of the missing youngsters; Jessica Urbano’s photograph is everywhere within two miles from the ill fated Grenfell Tower….

We left this at the end; the despicable effects for thousands due to the fire at Grenfell Tower in West London with 17 deaths – to rise considerably even up to a triple number from what we heard in the news, 30 still in hospitals around the capital including 17 in critical condition. A despicable event on all counts!

The Queen said her “thoughts and prayers” are with families. PM Theresa May went to the scene and she has already ordered a public enquiry. Labour’s leader Jeremy Corbyn went there too, as did the London Mayor Sadiq Khan and many politicians. There are about 4,000  (four thousand) such buildings/block of flats in the United Kingdom, with only 120 (onehundred and twenty) or so having fitted the sprinkler fire fighting security system. Big questions are now raised on many issues.

We sincerely hope all those responsible have to answer to too many questions and let’s see what will happen to all those responsible at all levels. Human life has no price! The fire fighters and them London Emergency Services did beyond their capabilities and many congratulations go to them. The public united immy begun an unsolicited support for all those in need!  It is about time the World sees what we do in the shipping industry and how advanced we are in comparison with all offshore, I mean land business, housing, etc etc on all safety issues.

You can watch a short video herebelow:

Have a nice evening and  be on guard for every eventuality from Pirates and Terrorists wherever you are on Planet Ocean!