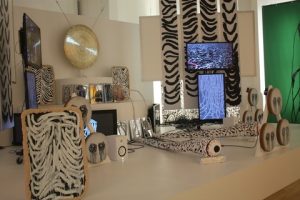 “Do you know that sinking feeling? It’s real,” protests a woman in an installation video clip amid deafening blasts of sound.

She typifies a pervading sense of disorientation evinced in a hugely ambitious presentation by UK-based artist Benedict Drew, which is on show at the Whitechapel Gallery, London. Disorientation is precisely the word for what is happening in Britain and elsewhere with momentous questions being posed about the nature of society in 2017. 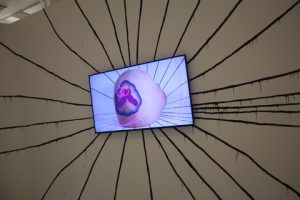 Benedict Drew calls the exhibition The Trickle-Down Syndrome and it continues his exploration of the points where the physical and digital meet. He seeks “to test and reflect on the relationships we have with technology and its oscillation between the exalted and the commonplace.”

Curator Emily Butler said Benedict was commenting on the effects of political and environmental issues in an abstract way… inviting the viewer to reach their own interpretations. 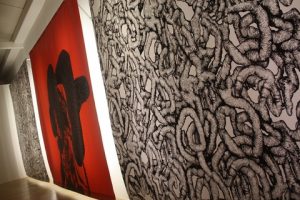 Concentrating on the ways that technologies and cultural zeitgeists imbue our experience of the world, he throws a big mix of media into his large-scale video, sculpture and music installations.

The exhibition title confronts the often-ridiculed assertion that tax breaks for the rich and for big companies will mean money trickling down to the poorer strata. The trickle-down term first came into use in this sense when it was used sarcastically to denigrate President Herbert Hoover’s efforts during the Great Depression to stimulate the US economy. Later opponents of President Ronald Reagan took up the theme to mock his measures favouring high-income groups.

Production image for The Trickle-Down Syndrome.

Experts said that the trouble was that when trickle-down economics seemed to be spurring recovery, credit for the uplift belonged to increased government spending.

While conscious of this controversy, Benedict Drew treats the term ‘trickle down’ in both economic and literal sense. 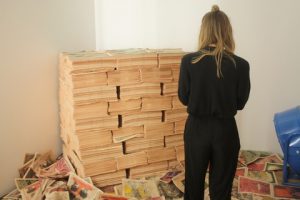 Confusion of the printed word.

He approached the trickle-down theory as symbolic of something that was not working… “but something is trickling down. I wondered if I could think about that, as a sculptor. There is an oscillation between the hand and the digital image.” This led to what might be called “gloop image” in his installations.

He uses hand-drawn motifs, sculptures and kaleidoscopic projections in five connected yet distinct instances which draw on references ranging from Hollywood director Busby Berkley’s 1930s stage-sets to the Surrealist landscapes of Max Ernst.

The anarchic side of his installations is intended as an escape route from and a critical response to what he calls “the horrors of the modern world.” He puts it this way: “The work contains a sense of the handmade, idiosyncratic, provisional and fantastical. I am interested in the feeling of submersion in social and environmental despair, being overwhelmed by images, confused by the shifting status of objects, disoriented by layers of history, trying to generate a state of being where you can escape, and seeing escape as a potent form of resistance, ecstatic protest.” 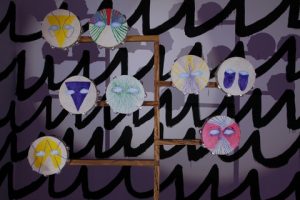 One of his most recent installation projects is The Saw Tooth Wave which takes its title from a type of audio wave produced by synthesisers of the 1960s. At the end of 2014, he initiated a work he termed Dyslexic Shanty which “attempts to tackle the anxiety and neurosis generated from the condition of dyslexia.” He imagines this condition as an academic shanty town, yielding a radicalised position opposed to a world ever more dominated by the written and printed word.

Central to his practice is the sound of music and all its complexity. He explores the cultural implications of sound: for instance, the sound of punk once regarded as outside the mainstream is now more generally perceived as “an energy” and what was psychedelic has become accepted for its potential.

Of music, he has previously said that he enjoys its psychedelic potential and that as is the case with art it can transport people away from the horror of the world. 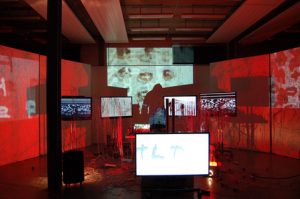 Throughout his career he has been involved simultaneously in experimental music and art, at one stage changing his interests to focus on the latter.

Music will return to the fore for him on July 1 on Art Night, a new one-day contemporary festival in which each year, a leading cultural institution and a curator will work in a different part of London, exploring the history, culture and architecture of the district.

For the occasion, he will turn his installation into a musical score, collaborating with experimental musicians in live improvisation on the stage which forms part of the installation.

Art Night 2017 will be presented in collaboration with Whitechapel Gallery across historically significant sites in East London, including the gallery itself. Art Night is a project by Unlimited Productions supported by international auction house Phillips.

Benedict, who lives and works in Kent, succeeded with a BA in Fine Arts from Middlesex University and Master of Fine Arts from Slade. He recently had solo exhibitions at the Centre for Contemporary Art Derry; Walker Art Gallery, Liverpool; and with Art on the Underground, London; and has participated in many group exhibitions.

Production image for The Trickle-Down Syndrome 2017. Drawing. By Benedict Drew. Copyright the artist and courtesy of the artist and Matt’s Gallery, London.

Benedict Drew: The Trickle-Down Syndrome is at the Whitechapel Gallery until September 10 2017. There will be a performance with music for Art Night on July 1.