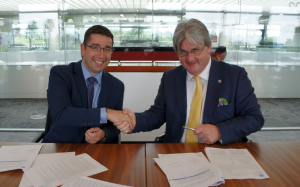 July 19, 2017 – UK-based Coldharbour Marine, a manufacturer of ballast water treatment systems based on unique inert gas technology, has signed a contract with Lloyd’s Register (LR) to oversee the complete range of tests required by the US Coast Guard (USCG) in its type approval process. LR has Independent Laboratory Approval from the USCG and will work closely in the type approval tests with Marine Eco Analytics (MEA), a test laboratory in the Netherlands. Revised and more comprehensive G8 tests agreed by the IMO’s Marine Environment Protection Committee at its 70th meeting in November 2016 will be undertaken at the same time.

Coldharbour Chief Executive Andrew Marshall said that the company had been fully committed to undertaking US type approval tests as soon as possible. However, until recently, there had been no test laboratory suitably configured and accredited to carry out effective testing of the company’s in-tank ballast water treatment system, as opposed to other manufacturers’ in-line treatment products.

“We were extremely impressed with the type approval process conducted jointly with Lloyd’s Register and the UK’s Maritime and Coastguard Agency when we undertook the original tests required for IMO approval,” commented Marshall. “These were carried out with the utmost diligence at MEA in the Netherlands for which we have the highest regard. MEA now has suitable accreditation from the USCG so we can proceed with the USCG testing protocols.”

Marshall said that MEA had originally been identified as a facility of choice because its location provides a ready supply of sea water from the North Sea and brackish water from the Wadden Sea. This, he said, guaranteed that tests would cover all types of water which ships could encounter. A second key reason for choosing MEA was that the facility carries out its tests using natural water collected by barges, meaning that samples contain natural fauna and flora rather than seeded or farmed organisms which often have different survivability characteristics.

“There’s no point doing these tests if the results could later prove unreliable,” Marshall said. “We believe we have a first-class in-voyage treatment technology for large ships which ensures that the ballast water discharge standard can always be met. Why wouldn’t we want the most robust testing procedures that produce reliable results? Lloyd’s Register will act as test supervisor on behalf of the USCG and will oversee every process whether at sea or on land.”

Lloyd’s Register’s Flans Kemp, Type Approval Business Development Manager, Marine & Offshore, commented: “Lloyd’s Register is delighted to be working with Coldharbour Marine to oversee the testing required by the US Coast Guard’s type approval process and revised IMO requirements. This work will build on the knowledge from the initial IMO type approval and Lloyd’s Register has every confidence that the system will pass the robust testing procedures once again.”

Coldharbour’s determination to ensure a fault-free testing system is demonstrated by the fact that the process will not begin until around next April when the correct number of naturally occurring marine organisms – 100,000 per tonne of water – are found in the waters of the Wadden Sea and North Sea. The season during which organism blooms contain sufficient zooplankton and phytoplankton extends from about April to September each year. Marshall believes that the full range of land tests required in the USCG type approval process is likely to take approximately five months.

To complete the testing team, Coldharbour has also engaged the services of two highly experienced independent advisors. Jon Stewart and Gary Croot of US-based International Maritime Technology Consultants have been hired by Coldharbour to provide insight and guidance specifically on the USCG type approval process.

Coldharbour Marine Limited is a UK-based design, engineering business with nearly four decades of inert gas and water treatment experience. The company has a long history in the inert gas generation sector, and has in recent years developed Sea Guardian™ – a clean, green, compact “third generation” technology for use in LNG carriers and large tankers.

Key features of the GLD™ system are that treatment takes place in-tank and in-voyage and without the need for any form of in-line filtration. This approach ensures no disruption to terminal operations during ballasting and no risk of re-growth of marine organisms on long ballast voyages. With the GLD™ system, large vessels are now guaranteed to arrive at terminals ready to load or off-load ballast without the risk of delay caused by BWTS operational difficulties.

The system is fully type-approved by IMO, with testing undertaken by both the UK’s Maritime and Coastguard Agency and Lloyd’s Register. It also has US Coast Guard Alternate Management Systems acceptance and is currently undergoing the full US Coast Guard type approval process.

Lloyd’s Register (LR) is a global engineering, technical and business services organisation wholly owned by the Lloyd’s Register Foundation, a UK charity dedicated to research and education in science and engineering. Founded in 1760 as a marine classification society, LR now operates across many industry sectors, with some 8,000 employees in 78 countries.

LR has a long-standing reputation for integrity, impartiality and technical excellence. Its compliance, risk and technical consultancy services give clients confidence that their assets and businesses are safe, sustainable and dependable. Through its global technology centres and research network, LR is at the forefront of understanding the application of new science and technology to future-proof its clients’ business.