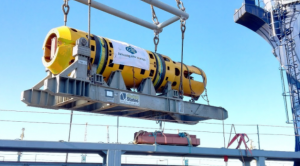 Re-loading of essential equipment at Poti, in transit to the Yuri Korchagin oil field in the Northern Caspian Sea

Grangemouth, Scotland, 19 July 2017 – GAC professionals in the UK and Russia have delivered an urgent multi-origin mega shipment for pile driving and swaging works in the Northern Caspian Yuri Korchagin oil field being developed by one of Russia’s largest oil companies.

The shipment was delivered to LUKOIL subcontractor GT Sever (GT North) for the Korchagin field Stage II development. GAC was appointed to handle the complex logistics operation to coordinate multiple loads totalling 500 tonnes of equipment from the UK, Netherlands and Germany. The move included a block conductor and pile fastenings, to be installed at the culmination of Stage II of marine operations development currently underway in the Russian sector of the North Caspian Sea. 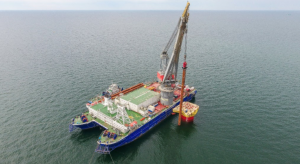 Multiple origins
The time-critical operation started with pre-carriage pick-up of cargo from England and the Netherlands, with the last-minute addition of an out-of-gauge item from Germany, for delivery to Rotterdam. GAC pulled out all the stops to obtain the required permits to enable the 20 units – the two heaviest of which weighed in at 105 tonnes each and were almost 15 metres long – to be loaded on to a vessel sailing for Poti in Georgia. Delivery by ship direct to Baku was not an option as Russia’s internal waterways were not open for navigation at the time, so GAC found a way to meet the tight deadline by bringing the cargo to Georgia by sea and completing the journey to its final destination by road.

Obstacles overcome
When it arrived just eleven days later, the vessel could not berth for two days due to foul weather. Despite congestion, as soon as the port reopened, GAC arranged and supervised the direct uploading of the cargo using the ship’s gear onto waiting trucks at an alternative terminal. Then, the trucks started the final 900km journey by road to Baku in Azerbaijan. Roadworks on the original route meant they had to be transported by a different course worked out by GAC and approved by the authorities. Despite the obstacles, the shipment arrived at its final destination on schedule.

Alexey Koudrenko, GT Sever’s Project Manager says: “We owe the success of this challenging move to GAC’s cross-border coordination and attention to detail in the planning. Their hands-on expertise, flexibility and determination to deliver were critical when the unexpected arose. We were in constant touch 24/7. GAC thought of everything and delivered as promised.”

ICHCA calls for cargo operations to improve in 5 key respects