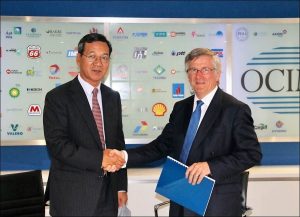 The MOU will see the Information Sharing Centre of ReCAAP, the first regional government-to-government agreement to promote and enhance cooperation against piracy and armed robbery against ships in Asia, and OCIMF, the foremost authority on the safe and environmentally responsible operation of oil tankers, terminals and offshore support vessels, cooperate to safeguard the interests of ships and seafarers operating in Asia.

Both parties will join hands to promote the partnership between governmental organisations and the shipping industry for the betterment of maritime safety by sharing information, best practices and expertise.

The signing of the MOU builds on an existing collaborative relationship between ReCAAP Information Sharing Centre and OCIMF. In late 2015, ReCAAP Information Sharing Centre and OCIMF, as well as other stakeholders[1] formed a working group to develop a comprehensive guide for shipowners and seafarers operating in Asian waters. “The Regional Guide to Counter Piracy and Armed Robbery against Ships in Asia,” a direct result of this working group, was published in February 2016 and has been disseminated broadly.

“Over the past few years, the incidences of piracy and armed robbery against ships in Asia have gradually declined. Continued vigilance and engagement with stakeholders are essential in safeguarding the interests of ships and seafarers operating in Asia. ReCAAP Information Sharing Centre’s deepening partnership with OCIMF represents our commitment to work with industry to support the safety and security of ship owners and mariners,” said Masafumi Kuroki, Executive Director of ReCAAP Information Sharing Centre.

“OCIMF is an international organisation focused on safety, security and environmental issues affecting the oil shipping industry. We have common values with the ReCAAP Information Sharing Centre to keep seafarers safe and the maritime highways secure. In today’s uncertain world, industry must work collaboratively and support governments in protecting our vital interests ensuring global trade can be safely conducted. This memorandum of understanding acknowledges the importance of that relationship,” said OCIMF’s Director, Andrew Cassels.