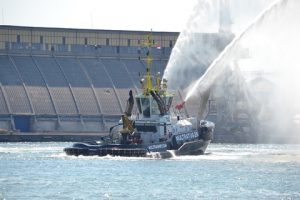 Leading towage and salvage specialist Multraship* is further strengthening its prominent position in the Black Sea region by transferring its state-of-the-art Damen-built tugboat Multratug 26 to the Bulgarian port of Bourgas for operation by its 100-percent owned subsidiary, Bourgas Tug Service.

Pepijn Nuijten, joint-managing director of Multraship, says, “Multraship believes very strongly in the strategic importance of the Black Sea region, and its prospects for commercial and economic growth. It is committed to expanding its fleet in the area to provide the quality services which the industry needs, both now and in the future.

“We have seen a significant growth in our Black Sea operations, mainly in harbour towage and in offshore work, not least that involving the Turkish Stream Project (and its predecessor the South Stream project) to build a natural gas pipeline from Southern Russia to Turkey.”

Pepijn Nuijten says, “Multraship acquired Bourgas Tug Service in 2005, since when it has continued to enhance its reputation as a quality provider of harbour towage, salvage and line-handling services in and around the port of Bourgas. We believe Multratug 26 will be the best-equipped tugboat in Bulgaria, and its deployment in Bourgas is part of Multraship’s commitment to provide specialist equipment and services in those parts of the world where they are most needed.”

MariNet at NEVA 2017 Conference and Exhibition

Tidewater joins NAMEPA in support of efforts to...