From the Royal Navy to the Catwalks! 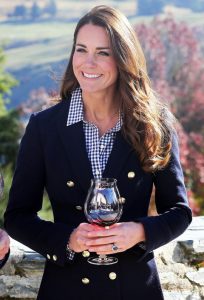 They are part of a standard naval officer uniform or of today’s nautical look often seen on runway models walking for Balmain, Ralph Lauren, and the likes. The peacoat and the nautical blazer, respectively, are deeply rooted in the British Royal Navy uniforms which gradually served as the template for maritime uniforms across the world. This blazer is still a royal item if you count the many times members of European families – women too – have adopted it. The Duchess of Cambridge is a keen adopter of this look which often comes in her prestigious wardrobe in affordable versions from J.Crew and Zara. 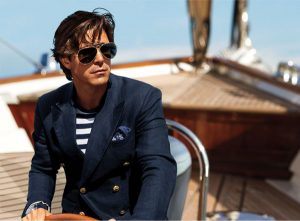 Although varied in style details, the original nautical blazer for ceremonial purposes is usually a dark navy blue double-breasted jacket. As for the peacoat, which is similar in pattern, it is a piece of outerwear crafted from heavy wool. The standard for the historical sailor jackets of the European and American navies was 850g wool, and for the US navy this meant heavy Melton cloth. In today’s market most coats are made of 620-910g wool. 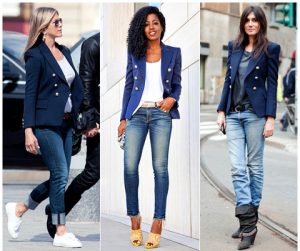 The etymology of the word peacoat is debated. Some relate it to the Dutch or West Frisian word pijjekker or pijjakker, in which pij referred to a type of coarse twilled cloth. Other link it to the heavy overcoat seafarers of the merchant marine wore in chilly weather. It was tailored from the heavy and rigid ‘pilot cloth’ with the nap on one side. It was also referred to as P-cloth and the garment made from it as P-jacket. 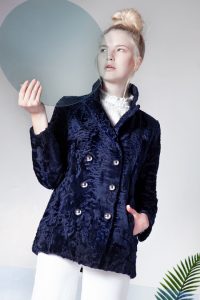 Based on the idea of weatherproof outerwear and the polished nature of the nautical blazer, Elena Sendona, Creative Director of the up-and-coming FEEL GOOD FUR brand, reinterprets the look through a much warmer luxurious piece crafted from ethically farmed astrakhan. “I wanted it to be sleek, chic, comfy, protective enough in bad weather, and timeless. My vision of the ideal piece of outerwear is one that lasts forever in your closet and is as classic as the original naval officer jacket,” explains the designer. Comfort runs high in the agenda of this brand, and so does an eco-friendly spirit, and the idea of an investment piece that passes as an heirloom from generation to generation. Indeed, a luxe nautical blazer is a real wardrobe asset not only for men but also for women. Elena Sendona, her revamped nautical blazer, and other avant-garde designs are competing at the Greek International Women Awards against an array of wonderful talents in the category of Fashion, so we wish her success in her mission of taking eternal style classics to the next level!