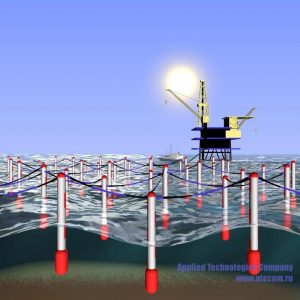 Moscow headquartered Applied Technologies Company Ltd. has been developing the Float Wave Electric Power Station (FWEPS), an installation for ocean wave energy conversion to electricity with high productivity, efficiency and operation performance, applicable to meet a power requirement in different areas of the world. The FWEPS concept will be presented by Marinet, the National Technological Initiative (NTI)’s working group on the sidelines of the prestigious international exhibition NEVA-2017 in St Petersburg, on September 19-21.

The module of the FWEPS is an oblong axisymmetrical capsule-float which is deployed on the sea surface. Inside the capsule there is a mechanical wave energy converter, consisting of an oscillatory system and drive, and an electric generator and energy accumulator. Under the wave effect the capsule-float and inner oscillatory system of the mechanical converter are in continuous oscillatory motion, while the drive engaged with the system provides a continuous turn for the electric generator.

Compared with other types of wave energy converters, the FWEPS has several exceptional technical features owing to: oscillatory property of the device –  which can be matched with outer wave space, thus giving the most effective mode for energy conversion; and sustainable operation at varying lengths, velocities and intensities of waves and directions, adapting to changeable external conditions.

Depending on the requirements, it is possible to develop both a single-module FWEPS with rated output power from units reaching 50 kW and multi-modular installation in a grid form.

A powerful FWEPS can be assembled of a large number, ten to fifty kW modules with a total capacity of up to dozens of megawatts.

A single-module device can be a power source for the sea-going ships, light and radio beacons, as well as for meteorological, navigation and communication systems, equipment for emergency and individual life support, etc.

Multi-modular installations can be used for power supply of coastal and island settlements; for setting up the environmentally friendly offshore and coast based processing plants, including exploitation of offshore rigs stripped oil wells; for a large scale electrolysis production of hydrogen and oxygen, thus stimulate the formation of ecologically safe hydrogen power engineering.

According to the International Energy Agency the market potential for the wave energy industry is about US$ 800 billion worldwide.