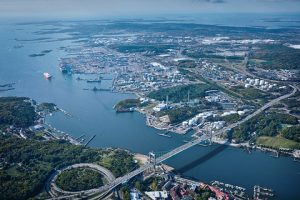 Aerial view of the Port of Gothenburg

The new facility will enable vessels to bunker LNG from trucks or containers while simultaneously loading/unloading cargo at two jetties at the port’s Energy Port, dispensing with the need to make a separate refuelling stop. The solution offers increased flexibility for customers and LNG suppliers, and will be open for multiple suppliers.

“We are very happy to have won the contract to build this first such bunkering facility in the important Port of Gothenburg. Our strategy to offer LNG solutions to the marine market, both on board vessels as fuel-gas supply systems but also as bunkering infrastructure, dovetails perfectly with the general development towards cleaner ship propulsion,” said Mikael Adler, Managing Director of MAN Diesel & Turbo, Sweden. He continued: “We strive to bring robust, smart and flexible solutions to the market, and this strategic project is an excellent example of that.”

The purpose-built facility will comprise of a discharge station for LNG trailers or containers, feeding pumps, vacuum-insulated piping and bunkering equipment to facilitate efficient operations. The installation will also satisfy the stricter sulphur directive for shipping and has been designated by the EU as one of the most prioritised infrastructure projects in Europe.

MAN Cryo will oversee the project under the terms of an EPC contract including engineering, procurement and construction, and managed from MAN Diesel & Turbo’s local Gothenburg office.

The facility is scheduled to open during 2018 and will be operated and managed by Swedegas in close cooperation with the Port of Gothenburg.

The Port of Gothenburg is the largest port in the Nordic countries with over
6,000 ship visits per year from over 140 destinations worldwide. As the only
Swedish port with the capacity to cope with the very largest, oceangoing
container ships, Gothenburg handles nearly 30% of the country’s foreign
trade, comprising 40 million tonnes of freight annually.

About Swedegas
Swedegas owns and operates the gas grid in Sweden and transports energy
equivalent to 15 TWh annually to distributors and customers with direct links.
The gas grid supplies natural gas to 33 municipal areas and several combined
heat and power (CHP) plants. It also provides natural gas to 34,000
households as well as customers in the domestic transport sector.
Swedegas is intensifying work on the development of smart energy systems,
which include regional grids and LNG terminals. Through the signing of the
Green Gas Commitment in May 2013, Swedegas and other European gas
grid operators declared their ambition to switch to renewables by 2050.

About MAN Cryo
MAN Cryo has built its reputation, and delivered advanced technology to the
gas industry, for over half a century. It develops efficient and economical
solutions for demanding, marine applications in the form of cryogenic
equipment for marine fuel-gas systems, as well as for offshore and onshore
bunkering systems.

Situated in Gothenburg, Sweden, MAN Cryo is one of the world´s leading
manufacturers of cryogenic equipment for the storage, distribution and
handling of liquefied natural gas (LNG).

MAN Cryo is an established name, with many years of experience and wellproven
products, within the field of vacuum technology and cryogenic tank
engineering. MAN Cryo provides comprehensive aftermarket services in
association with MAN PrimeServ, MAN Diesel & Turbo’s after-sales division

Strategic appointment made by IMCA