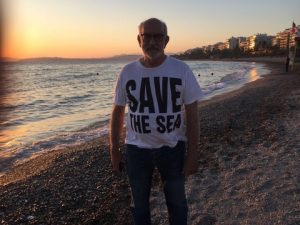 It is nearly a week now that the entire Athens Riviera in the Saronic Gulf is threatened from a maritime accident leading to a catastrophic pollution with incalculable repercussions on all sector of everyday day life – economic, environmental, financial, shipping, touristic to name but a few sectors, as well as repercussions on a political level. This is happening at the most crucial time Greece lives as well as on a very bad timing given that the touristic season has another 45 days to go until the end of October where swimming remains the most popular holiday entertainment, needless to say the other sea sports…

Our video is self-explanatory and the news we read and hear are more than disturbing particularly fake news, governmental news and views from the entire political establishment in Greece. Don’t ask what happens on a private level via all means of communication, the media – TV and newspapers  and social media to an extend proving in what a messy society we live in. Unions, NGO’s and other organisations are saying their long and sort making it more difficult than ever before. Accidents, maritime accidents including pollution ones will continue to happen, no matter how well prepared we are; this is the pitiful message, but loss of valuable time and statements flying here and there are counter-productive and become the stumbling block for the swift counter response to pollution. Unfortunately the politicians involved  -and to be more precise they come from all parties, are totally incompetent. It is to the credit of some Mayors in the region, particularly that of Paleon Faliron Dionissis Hatzidakis in battling pollution as well as volunteers and other organisations.

The small tanker, the “Agia Zoni II” will surely, one way or another will open the Pandora’s Box of Revelations and many must not just resign but head voluntarily behind the bars.

The Greeks need an answer here and now, an honest account of what really has happened and see that the perpetrators, their backers and whoever is involved in any way whatsoever in this despicable messy crime receive the toughest of sentences. The competent authorities have spectacularly failed in containing the disastrous spill. The place of the accident doesn’t excuse an iota none all from all those responsible. If this doesn’t happen and we don’t have the truth , rest assured that somebody will bring up the truth and then the wrath of Posidon will be upon you… You bet?

The Health of US Presidents

What a horrid shame. As you know we recently visited Paleon Faliron & Glyfada
about a week before the mishap.

This cleanup must be complete by the early Spring in order to avoid another ruined tourist season!

Best of luck to our beloved Riviera in dealing with this mess.

Thanks for giving this unfortunate incident your attention & we, here in the States, look forward to your updates