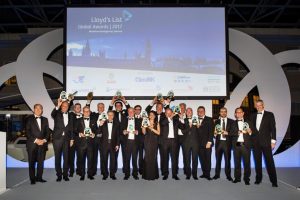 Group winners on the stage of the world!

LONDON, September 29, 2017 – The winners of the 20th Anniversary Lloyd’s List Global Awards have been unveiled at the Lloyd’s List annual gala event.

“Congratulations to the exceptional group of awards winners. We are excited to pay tribute and celebrate the best, most innovative companies and individuals in shipping,” said Richard Meade, Managing Editor, Lloyd’s List. “The awards programme gives companies across the world the incentive to forge new, innovative paths in the industry for years to come.” 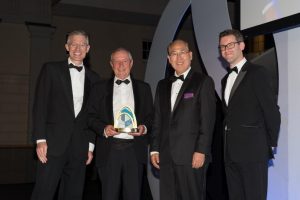 Francis Vallat, President of the European Network of Maritime Clusters holding the award

Lloyd’s List has bestowed the Lifetime Achievement accolade on some of the shipping industry’s most influential leading lights. The 2017 award was presented to Francis Vallat, president of the European Network of Maritime Clusters. The award recognised Vallat’s lifetime’s dedication to raising the standard of shipping and promoting the case of safety worldwide.

Vallat co-founded the Cluster Maritime Français, gathering more than 400 companies and professional federations, to create the European Network of Maritime Clusters. To date, this has brought together 18 national clusters.

He recently took on the new role of president of the French arm of SOS Mediterranée to alleviate the suffering of migrants leaving Libya in leaking boats. “SOS has already saved many hundreds of lives, and it is a great honour for Lloyd’s List to applaud the latest in Francis Vallat’s long list of commitments to the shipping industry,” Meade added.
Other winners at the Global Awards included Hapag-Lloyd, which took Deal of the Year for its merger with UASC, and in a challenging market for the container sector it was APL that was named as the Container Operator of the Year.

With innovation front and centre in shipping’s future, the China Merchants Port Holdings Innovation Award was one of the most sought-after accolades, going to Denmark’s Evergas, which won the award for its Dragon multigas fleet.

The Lloyd’s List Global Awards were independently judged by a group of esteemed industry experts from around the world.

About Informa
Lloyd’s List Global Awards 2017 is part of Informa, the international business intelligence, academic publishing, knowledge and events group. Informa serves commercial, professional and academic communities, helping them connect and learn, and creating and providing access to content and intelligence that helps people and businesses work smarter and make better decisions faster.
Informa has over 7,500 colleagues in more than 20 countries and a presence in all major geographies. It is listed on the London Stock Exchange and is a member of the FTSE 100.

Tell me, is the Atlantic big?