Eyes over the Storms 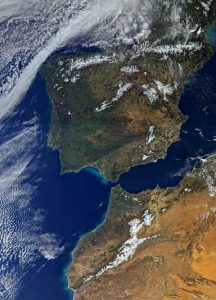 Eyes over the Storms – EUMETSAT explains the crucial role of satellites in monitoring ocean influence on weather, climate

On the surface, the devastation recently brought by hurricanes, the fluctuations of marine phytoplankton in global oceans and the impact of sea surface temperature in the Pacific on weather in Europe might not seem to have much in common.

Yet they are all interconnected—through global oceans that cover 70% of the planet’s surface. Oceans are vital for the existence of life on Earth and for the wellbeing of Earth’s inhabitants and ecosystems alike. Oceans power the weather systems in the atmosphere, shape the global climate. They also are the lungs of our world: marine phytoplankton account for about half of all photosynthetic activity on Earth and most of the oxygen we breathe.

How do we know? There’s a growing fleet of Earth observation satellites in orbit, which are providing a completely different way of how seemingly varied phenomena across the globe are in fact linked.

These observers in the skies have been monitoring global oceans for years but only very recently, after the 2016 launch of the Copernicus Sentinel-3 satellite, has the ocean of available marine Earth observation data increased vastly and is already spawning a whole shoal of new applications that help to better understand the interaction of global oceans, weather systems and climate.

The good news is: The data are free and open for everybody.

On 16 October, EUMETSAT, the European Organisation for the Exploitation of Meteorological Satellites, is re-launching an upgraded version of its popular, EU-funded massive open online course, “Monitoring the Oceans from Space” to anyone who wishes to learn more about how satellites contribute to our understanding of the oceans. The course is free—as is the actual access to these data.

“Data from Earth observation satellites are crucial to efforts to better understand the health of our oceans because only satellites can give that truly global perspective,” EUMETSAT Training Manager Dr Mark Higgins said.

The Copernicus Sentinel-3 satellite is part of the EU’s flagship environmental programme, Copernicus. EUMETSAT is responsible for the day-to-day operations of Sentinel-3 and for processing and disseminating its marine data stream. One of the main users of the data is the Copernicus Marine Environment Service, where experts interpret and make available data relating to four key application areas: marine resources, maritime safety, coastal and marine environment and climate monitoring.

Registrations to the course are now open. For further information visit: