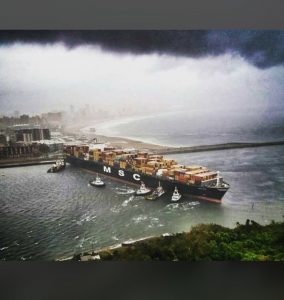 What a mess; but luck is always there…

By 18h30 yesterday, three vessels that were grounded had been successfully refloated and remoored. The 2.5 hour operation included up to eight tugs and 70 individuals working tirelessly to secure the vessels. Among the tugs assisting in operation was the Port of Durban’s powerful new UMBILO which was recently built locally and boasts a 70-ton bollard pull.

TNPA Chief Executive Shulami Qalinge said: “We are extremely appreciative of the excellent collaboration between our TNPA marine teams and key stakeholders who acted quickly and efficiently. This was an opportunity to demonstrate the capabilities of South Africa’s locally trained marine resources and the crew involved certainly outshone themselves.”

Durban Port Manager Moshe Motlohi said first priority yesterday was the stricken MSC INES container vessel which was grounded across the port’s entrance channel. Five tugs successfully towed the 9,115-TEU, 348.5 metre vessel to safety. Next to be secured was the tanker BOW TRIUMPH at Island View berth 4, followed by a second container vessel, SM NEW YORK, which was remoored and stabilised at the Durban Container Terminal.

Teams had also managed to refloat the floating dock at the premises of Southern African Shipyards together with one of TNPA’s nine new tugs which was still under construction at the shipyard.

Mopping up operations continued this morning. TNPA’s Dredging Services division, Subtech – a private marine service company – and drones are conducting sounding surveys to highlight any unsafe build-up or obstruction on the seabed that could pose a risk to navigation.  Engineering teams aided by aerial drones were conducting physical assessments of affected port buildings and infrastructure to assist in quantifying damage.

Motlohi added: “This successful operation was made possible through our Joint Operations Committee with SAMSA and our 24-hour Business Continuity Plan (BCP) at head office and the Ports of Durban and Richards Bay.

“We commend the marine workers involved who displayed skill and agility in managing the situation. A special thank you to all those involved including SAMSA, the private sector and our own TNPA tug masters and marine crew.”

Port teams remain on scene. The Business Continuity Plan (BCP) will remain in place until TNPA has restored normality at the Port of Durban. At this stage, Durban marine operations are anticipated to resume by midday on Thursday, 12 October, pending the outcome of the sounding surveys.