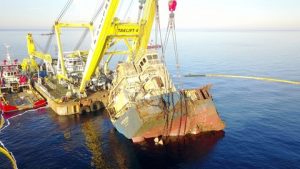 From the Cabrera’s refloating

The refloating of the aft part of the cargo ship “Cabrera” was successfully completed today.

The “Cabrera” was loaded with 3,500 mt of steel in her holds and she also had 200 tons of bunkers. She sailed from the Port of Larymna in Greece for Finland. 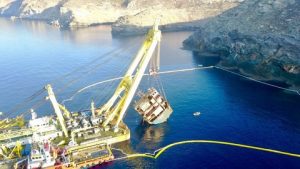 Another shot depicting the refloating and the protecting antipollution booms

Because of her sinking a few dozens of light fuel leaked due to the heavy weather that was buttering the region of Cabanou, and a large part this controlled quantity was spread to a wider area.

The antipollution and refloating of this cargo vessel was undertaking by three companies: Smit Salvage, Megatugs and Antipollution.

Today, representatives of these companies met at the position of the shipwreck in order to closely watch the refloating procedures of aft part/section of the “Cabrera”. Amongst others, present there were the Mayor of Andros Theodosis Sousoudis as well as the Harbour Master of Andros. 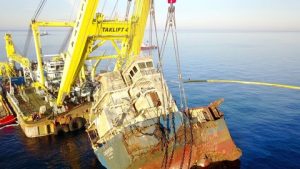 The refloated part of the vessel will be transported next door to one of Turkey’s scrapyards.