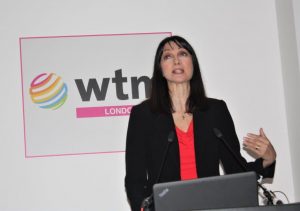 Tourism is a top priority for the Greek government, Elena Kountoura, minister of tourism, told the World Travel Market in London, as she confirmed that 2017 has created new records and that the industry was set to be boosted further in 2018.

Mrs Kountoura, addressing the major event for the third year in succession, said that “in the last years, tourism has emerged as the engine for growth, the driving force of the economy and society. It represents directly and indirectly more than 20% of gross domestic product and almost 1m jobs. It is a bridge for projects in energy, infrastructure and new technology.”

Tourism in Greece was continuing to grow at 7% a year, compared to the global average of approaching 4%. Bearing out forecasts. international arrivals were heading for 30m in 2017, 9% higher than the previous year. The outlook was “very positive for 2018,” and new flights were being added and new routes launched.

Greece was set to benefit from the One Belt, One Road initiative of China, including direct connections between Beijing and Athens. 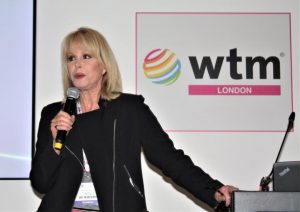 The minister said that her government had made licensing of tourist businesses “faster and easier” as rules dating back more than 100 years had been brought together and codified. More than 300 new investment proposals had been submitted to the ministry’s “one stop shop” in the past two years. Two hundred and fifty investment proposals had been submitted to support small and medium businesses, “the backbone of the tourism sector.”

Greece was third among leading European cruise destinations and the country with its 16,000 km of coastline was ideal for yachting, sailing and diving.

She underlined the objective for Greece to be viewed as a 365-days-a-year tourist season in several destinations, and the importance of sustainable development in tourism for local communities. 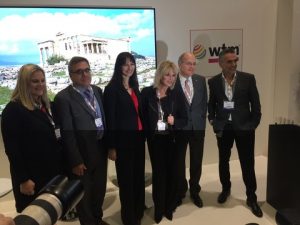 A show of force

The minister was followed on stage by author, activist and actress, Joanna Lumley, who made full play of her stage magnetism to rejoice in her experiences during filming throughout Greece to bring home to the wider public the huge diversity of the country.

She began by talking of her childhood beginning of her Greek connections when she realised that her older sister Aelene had a Greek godmother. At boarding school, her dormitories were given the names of the Greek alphabet, from alpha onwards. “By the time I had left school, we had become ‘Greek maniacs.’ And the first country we wanted to visit was Greece.” 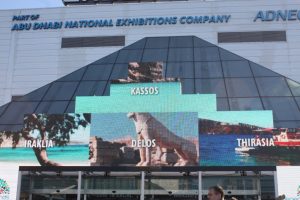 Part of Greek campaign at WTM.

Ms Lumley said that she was “hooked on Greek mythology.” She left her heart in Thessaloniki, which was “abuzz with life.”

While she had been privileged to attend the Chelsea flower Show many times, that was nothing comparted to the flowers that grew on the verges in the Peloponnese.

She urged her audience: “You have got to travel by boat and get into Patmos to see where St John the Divine had his Revelation.”

She added: “Greece is so full of legends, nowhere more than on Kos. The physician Hippocrates was the first man in the known world to say it was not because the gods were angry, but because the body has gone wrong that you were unwell.”

Ms Lumley recounted how tears streamed down her face as she watched the singer Nana Mouskouri fulfil a dream of performing at the ancient Epidaurus theatre.

If there were any doubts about Greece for a holiday, “force someone to go, they will never be disappointed.”

Among sectors eagerly following the minister’s urging to promote the natural produce of the country are vintners and cheesemakers. Of the 60 regional cheeses, one third are protected designation of origin varieties. The many varieties of wine are supplemented by spirits and liqueurs such as the mastiha of Chios based on an aromatic resin extracted from the mastic tree; and ouzo produced at Plomari in Lesvos “traditionally known as the best ouzo in Greece.”