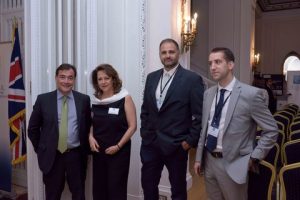 By kind permission of H.E. the British Ambassador, Ms Kate Smith CMG, the Hellenic Committee of Lloyd’s Brokers Associates organized a Lloyd’s briefing and Marine Hull Market discussion at the British Embassy Residence in Athens, on Thursday, the 2nd November 2017.

The event was opened by Maria Kouliga-Pavlou, President of HCLBA, who welcomed the guests, all part of the Greek shipping community.

Mr. Benno Reischel, Lloyd’s Head of Europe, followed, by making reference to the long-standing relationship between the Greek shipping Market and Lloyds insurance market. Benno advised of the Brexit arrangements Lloyds have already in place, having set up a new insurance company in Belgium which will be writing European business as from 1st January 2019. 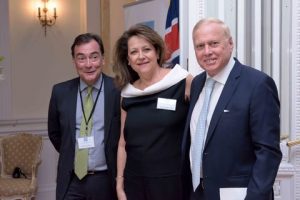 Mr. Manos Lorentzos, Vice President HCLBA, consequently held a discussion with Iain Henstridge, Head of Hull in Apollo Lloyd’s Syndicate, and George Gourdomichalis, CEO, Phoenix Shipping and Trading S.A. Current issues facing the marine hull insurance market were discussed , and specifically the hardening of the Hull market in London. Iain presented Lloyds figures showing a projected Loss Ratio of 135% for the 2017 policy year, mainly due to recent catastrophe losses related to hurricanes in the Caribbean as well as forest fires in California, which have impacted heavily the reinsurance market. 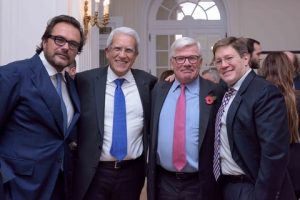 George Gourdomichalis made the point of marine underwriters having been writing unprofitable hull business for years, but he accepted the fact that good security will always be in high demand and the priority for shipowners. Iain touched upon the need for Cyber insurance and new technological developments which might lead to a shipping industry disruption. 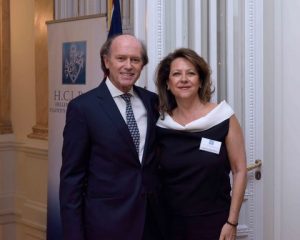 The floor was then taken by Peter Economides, a well-known Global Brand Strategist, who questioned the discreet public image of shipping, in spite that the shipping industry moves around the world the vast majority of raw materials and finished products. Disruptive change in shipping was also a subject which Peter argued that might be unavoidable in todays’ world.

The Cocktail which followed at the British Embassy Residence premises was attended by about 200 Greek shipping industry professionals, with a vast number of ship-owners amongst them. H.E. the British Ambassador, Ms Kate Smith CMG, welcomed the HCLBA guests and made reference to the long standing business relationships between the two nations. 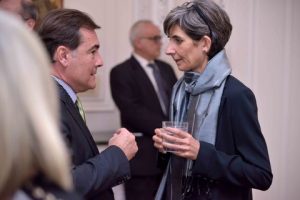