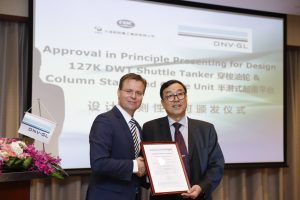 Lu Xiao Hui, Vice President and Chief Technical Officer of DSIC, commented on the significance of the AiPs: “DSIC and DNV GL have successfully collaborated on joint design development and classification for various ship types and offshore units since the 1980s. With these two latest AiPs, DSIC further enriches our product portfolio to the benefit of our clients. Both DSIC and DNV GL will gain from the deeper and broader cooperation that these AiPs represent.”

Torgeir Sterri, Regional Manager for Greater China at DNV GL – Maritime, presented the AIP certificates to the shipyard. “We are pleased and proud to be able to further strengthen our cooperation with DSIC with the presentation of these AiPs, in particular to help them introduce a new design in the promising shuttle tanker segment,” Sterri said. 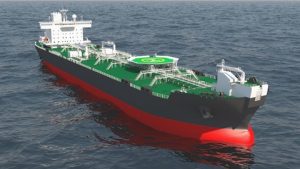 In response to market indicators signalling an upturn in the shuttle tanker market, DSIC has developed a new 127,000 DWT shuttle tanker design targeted for operation in the North Sea and on the Norwegian Continent Shelf. The design features DP2 capacity and a twin propulsion system, and is already in compliance with EEDI Phase 3 regulations.

Prior to the start of the AiP project, DNV GL’s leading expert on shuttle tankers, Olav Tveit, was invited to conduct a two-day shuttle tanker workshop at DSIC. “DNV GL class has the biggest share of the global shuttle tanker market, in particular for those operating in the North Atlantic,” Tveit said. “DSIC is one of DNV GL’s key customers in China, and we are very pleased to support them in this segment.” 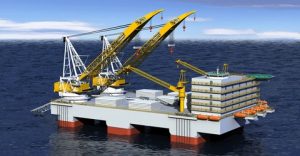 DSIC’s DSCU12000 design for a column-stabilized crane unit with dynamic positioning system also received an DNV GL AiP. The unit is equipped with two rotary heavy-lift cranes and S-Lay pipe laying system, and is capable of performing heavy lifting and pipe laying operations in moderate to harsh environments, including offshore UK and in the North Sea. The design is based on DNV GL’s +1A Column-stabilized Crane Unit DYNPOS-AUTRO Crane-offshore class notation and adheres to the latest DNV GL offshore standards and the IMO MODU (Mobile offshore drilling units) Code.

“Semi-submersible crane units are relatively uncommon, and the design is novel in terms of size and capacity,” said Torgeir Sterri. “For this unusual project, DSIC approached DNV GL for the AiP based on the two companies’ long history of cooperation and DNV GL’s strong position in the offshore industry.”

An Approval in Principle is an independent assessment of a concept within an agreed framework, confirming that the design is feasible and no significant obstacles exist to prevent the concept from being realized. The AiP is typically carried out at an early stage of a project to confirm its feasibility for the project team itself, company management, external investors or regulators.