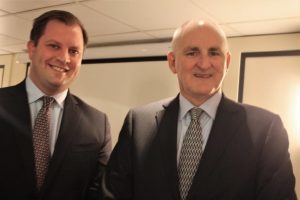 An arid expanse of terrain in South America holds one of the keys to the technological advance and commercial success globally of new-energy vehicles and other high-efficiency applications.

Hopes of boosting medium-term supplies of lithium for the new generation of batteries focus on high-altitude desert salars (salt pans) in the “lithium triangle” in northern Chile, Argentina and Bolivia.

A development company, Lithium Power International (listed on the Australian stock exchange under the ticker LPI) has been briefing investors in London and elsewhere in Europe on its plans for what it says is one of the world’s highest-grade pre-production projects. Once on stream, the project would buttress the role of Chile in having the world’s second largest highest grade lithium project (after SQM and Albemarle). 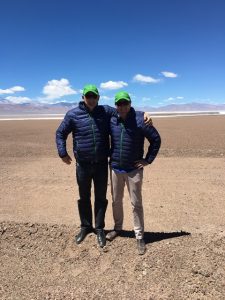 Grades at the large Maricunga property, held 50% by LPI, are said to be at least 70% higher than any undeveloped lithium salar resources elsewhere. The site is in one of the driest places on earth, the Atacama Desert, near the Argentine border, at 3,750 m above sea level. The Maricunga project lies to the south of the Atacama Salar, which hosts two major lithium brine operations.

Martin Holland, managing director and chief executive of LPI said that in the pre-production ranks “we have significant first-mover advantage.” He said that given the prospects, “this is not a mining company, it is a chemical company.”

As the motor industry begins to make a big transformation into electric cars, Lithium Power International is one of several specialists hoping to cash in on global demand for the carbonate which is distilled from the brine in salt flats. Lithium goes into rechargeable batteries for cars and for an array of other products.

Experts at the giant mining group BHP have forecast that the number of electric cars globally will surge from around 1m currently to 140m, or 8% of the global auto total, by 2035.

Demand from China, which represents some 40% of the market for the metallic element, comes on the back of Beijing’s initiatives promoting electric vehicles and renewable energy that requires storage. 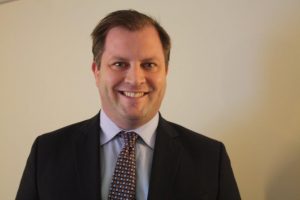 The Chilean partner which holds a 32.3% stake is Minera Salar Blanco headed by Martin Borda, former president of Aston Martin Santiago and entrepreneur in many sectors including salmon farming and processing of seaweed and algae.  A 17.7% interest is held by Toronto-listed Bearing Lithium Corp.

Mr Holland said of the approach by Fulin that at this stage “we are non-sellers,” and that the huge competitive tension in the sector would help maximise shareholder value.

A draft, non-binding memorandum of understanding outlined that Fulin and the Chilean joint venture company would investigate cooperation, including a potential equity purchase in the Chilean entity of between 20% and 50%, and a funding agreement to provide equity and debt for capital expenditure. Fulin aims to secure direct project interest, offtake and agency rights.

Mr Holland drew a parallel between lithium and the early years of the iron ore market when the latter was opaque and dominated by contract arrangements. In both cases, “the survivor is the lowest-cost player,” he said. 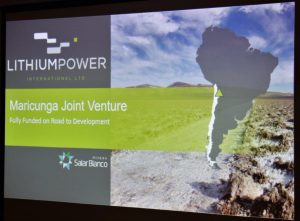 Compared with the iron ore industry, which involved huge tonnages, transport of the constituents of the lithium trade would be more efficient. A port and logistics assessment of Maricunga has been completed, and “you need only 70 cargoes a month to produce 20,000 tons of lithium,” said Mr Holland.

The strategy is that from the salar, material would be taken by flatbed truck to a warehouse, stored for six days then shipped for export from Antofagasta. Road haulage to port would be 660 km. While local ports are close they lack bulk handling capacity.

Soda ash – 10,000 tons over three months – would need to be imported for Maricunga through Antofagasta from a variety of sources, as a reagent to eliminate impurities.

The property is a one-hour flight from Santiago followed by a three-hour drive. It is next to the Chile-Argentina highway and 170km northeast of the mining town of Copiapó.

Lithium Power chairman David Hannon said that he and Mr Holland made many trips to Chile and Argentina to narrow the field of potential investments down to the asset they wanted: and they had chosen a project with a multi-decade mine life. “It is extraordinarily high-grade lithium, but it did not have scale,” said Mr Hannon, and since finalising the Maricunga joint venture in September 2016 the company had increased the accessible resource by four to 2.15m tonnes of lithium carbonate equivalent “of the highest lithium grade in the world.” There is potential for further expansion of the resource.

Mr Holland added: “We know we have the most enriched part of this salar, and the only flat land in the area install the required evaporation ponds.”

Three years after lithium carbonate production begins, a secondary output will be available: potassium chloride fertiliser – the resource figure for that is put at 5.7m tonnes.

Pumping has confirmed what the company says is the high flow rate of the sediments, which have high permeability, a factor “very positive for long term brine extraction from the salar.” The flow rates are described as comparable to those of major lithium brine producers.

The brine is drawn up through various layers – it is as easy as turning on a tap. It goes into massive evaporation ponds and concentrates to a certain level, when the critical material can be processed on site. A pilot plant is already built.

On the day of its London presentation, the company’s market capitalisation was A$124m.

More than US$50m has been invested in the project to date and all expenditures through 2018, including the delivery of a definitive feasibility study late in 2018, are fully-funded. Since June 2016, close to A$70m has been raised in equity. Eventual all-in capital expenditure could come close to $500m.

Lithium Power is earning into the project by funding exploration and development costs: putting in US$27.5m in stages, and only needing to inject a further $7.5m.  The company currently sits with A$37m in LPI Australian account and $US6m in Chilean joint venture account.

An imminent plus to minus 25% preliminary economic assessment will be based on an estimated production rate of 20,000 tonnes of lithium carbonate per year.

After a visit to the site, brokers from Sprott Capital Partners wrote that its good logistics, ample room for evaporation ponds, and favourable drainability “leads us to surmise that the company’s exploration target is eminently achievable, potentially lifting the resource to a ‘strategic’ size once drilled.”

Christopher Ecclestone of Hallgarten & Co, who participated in the site visit, said that the Salar de Maricunga looks like being the “next cab off the rank” in the Chilean lithium space. He remarked that it is an industry sector “where problematical mineralogy and fractured ownership bedevil so many players.” He noted that Chilean state company SQM had experienced difficult negotiations with the government over its Atacama deposit.

Mr Ecclestone said that the infrastructure was exceptional for such an “isolated” location with road access to ports being upgraded at government expense. Describing the environment of the salar, he recorded that rest zones in the elevated region urge drivers to “take a breath” for the sake of themselves and their passengers.

Hallgarten has added Lithium Power International as a “long” in its Model Mining Portfolio because of the potential of Maricunga to put life back into Chilean salar exploitation, “the highly positive outlook for the lithium price, the lack of seriousness of many competing players and the seriousness of the management intent at Lithium Power.”

In addition to Maricunga, Lithium Power International recently divested its interest in the Centenario lithium brine project in northwest Argentina for A$3.75m and holds 100% interest in Greenbushes hard-rock and Pilbara hard-rock projects in Western Australia.

Roskill Lithium Industry Consultants refers to “explosive growth” in demand for lithium-ion batteries. By 2026, forecasts Roskill, the transportation market for Li-ion batteries could top 1TWh— which is 1,000 GWh, enough gas to power for instance 83,000 UK homes for a year. New supply is coming on stream slowly, because of permitting and construction constraints.

Battery manufacturers usually prefer brine for lithium production, as against hard-rock spodumene concentrate or ore. Brines are typically easier and cheaper to extract and can be purified on site to up to 99% lithium.

Analysts are keeping an eye on the 2017 presidential run-off election in Chile, where political newcomers have made their presence felt, but the winner of the December 19 ballot will be from one of what are considered mainstream parties. The right-wing candidate and former president Sebastián Piñera (who is said to like the mining sector) is battling the centre-leftist Alejandro Guillier.