In Another Life: refugee dignity and desperation on screen 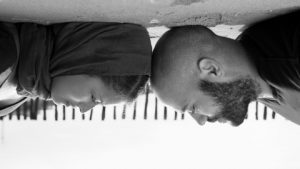 In Another Life: refugee dignity and desperation on screen

“Some are living in mansions, some are living in halls – when there is no place for us, my dear.” This is one of many paradoxes that play out brutally for the world’s refugees, more than 65m of them.

By focusing on the story of two uprooted Syrians who get as far as the Calais ‘jungle’, the encampment near the French port, a stunning new wide-screen, black-and-white movie drives home the desperation of these people – and their dignity. 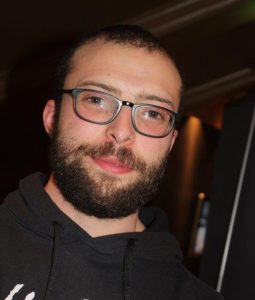 The film-makers wanted to hear the stories of refugees, but felt there were lots of documentaries about the Jungle and their impact was thus muted, so sought to make a production with a narrative: fictional but based on the nightmare conditions.

In another Life charts the dogged attempts of two healthy and educated young men who fled Syria, to stow away like many others on lorries, ferries, cars, and Eurostar trains across the Channel to the UK.

The modern, international, European concept of “freedom of movement” is starkly contrasted with the plight of the stateless. Scenes of thunderous truck and car traffic on the motorways, and of huge ferries such as P&O’s Spirit of France and a DFDS passengership carrying tourists to and from Dover, rub in the frustration of thousands of migrants who are blocked at every turn from making the 33 km transit over the busy shipping strait. With the white cliffs of Dover almost within sight, the journey when considered from the other side of Europe, had looked so easy. 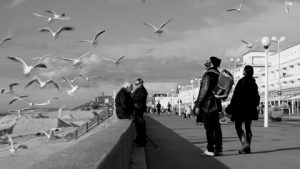 Envying the freedom of birds.

It all gives a powerful insight into the psychological and physical trauma experienced by the characters Adnan (played by French-born Elie Haddad) and Yousef (Palestinian/Irish Yousef Jubeh) who are driven to the brink of losing hope, but who buoyed by their friendship keep renewing their determination to reach their goal. “In another life I was a teacher. Now I’m a refugee and there is no place for us,” says Adnan, who is acutely aware of the us-and-them divide symbolised by mansions and halls.

The two men put in towering performances. Yousef was originally hired to be translator for the film crew but was swiftly persuaded to take on his major acting role. 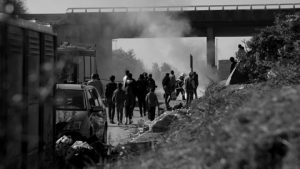 Adnan has urgent reason to reach England because he had earlier seized the chance to bundle his wife Bana (Toyah Frantzen, of Cuban, Jamaican and Dutch heritage who is known for her UK television acting career, including Grange Hill and The Bill) surreptitiously into the back of a small GB-registered van while its driver had left it parked for a few minutes.

Another member of the multi-racial cast is Mima (Biniyam Biruk Theshome), a journalist who was tortured in Ethiopia and who had lived in the camp for several months before meeting the producers. He did make it to the UK several months later, risking his life under a train, and was granted refugee status.

The central character, Adnan, says: “Our once beautiful homeland had become uninhabitable.” Many people had risked their lives on the open water, “giving all we had to the ruthless, the opportunists who trade in the currency of human misery.” 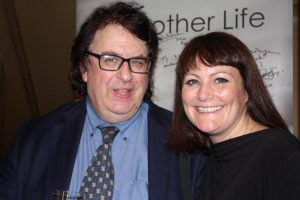 His eyes are opened: “Europe was meant to offer us hope. Yet the borders closed one by one… the police treat us like animals. They beat us and spray us with tear gas every day. We cannot move forward, we cannot go back.”

The peak of Jungle ‘life’ if such a word can be used for the squalor there, was from January 2015 to October 2016, a month in which 6,400 migrants were forcibly evacuated by the authorities. Asylum seekers and economic migrants were and are cheated and mistreated by traffickers, who are convincingly and menacingly represented in several scenes.

The latest news from the migrant front is as grim as ever, with the first deaths of 2018 resulting from the collapse of a dinghy which set out from Libya; and fierce bombing in Syria certain to spur thousands more people to try to flee that country.

The crowdfunded film, which was two years in the making, was shot mostly in English but with harrowing, subtitled dialogue whenever the ruthless people-smugglers have contact with their victims. To finish the film, the team built a “mini-jungle” on a protest camp near Manchester. 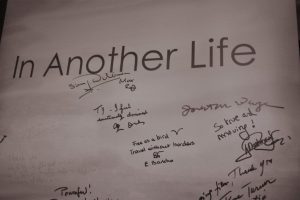 Writer and director Jason Wingard said: “It was hard not to be moved by the living conditions in the camp. I had a strong conviction that the news in the UK was not providing a full picture. The coverage felt fearful and simplistic; writing people off as economic migrants felt deliberately divisive and unfair. To get a sense of what was really going on, I believe you had to talk to people living inside the camp.”

At a special showing in the Regent Street Cinema, a respectful restoration of the hall started in 1896 by the Lumière brothers as the first British cinema, guests wrote their comments on two tall promotional banners. One of the most moving came from Lord (Alf) Dubs, who has campaigned vigorously for the UK to take in refugee children. He wrote: “Thank you – I feel emotionally drained.” Born in Prague, Lord Dubs arrived in Britain as a child in one of the Kindertransport trains escaping the Nazis. Other guests excoriated the UK government for turning its back on the opportunity to process immigrants from the Jungle, and cited the liberty of seagulls (longingly watched by Adnan) which have no passports or borders.

A leading film critic, Phillip Bergson, meanwhile praised the accomplishment of director Jason Wingard in his first feature film. Phillip described In Another Life as a swiftly-paced, convincingly-acted and utterly involving recreation of the struggles of refugees trapped in the camp.

Ten further screenings in London and elsewhere are scheduled between now and February 26, 2018 (including another at Regent Street, on February 6, and there are full details at www.inanotherlifethefilm.com) This essential drama of our times deserves the widest further distribution. Awards already gained include one for best UK feature at the 2017 Raindance film festival.