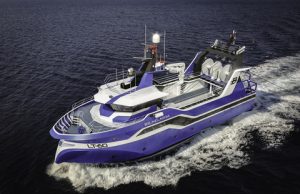 Although the new vessel, to be named Meindert Senior, will have the same Vripack naval architects design as the Spes Nova, it displays some major differences. At 31 metres long with a beam of 9 metres, the Meindert Senior will be able to operate with a gross tonnage of less than 400 tonnes. Furthermore, the new vessel will have a conventional diesel propulsion configuration.

This will not be the first Damen-built vessel in Rense and Johannes de Boer’s fleet, as Eric Moerkerk, Deputy Director at Damen Maaskant Shipyards Stellendam, explains: “The De Boer brothers already have two vessels from us: the LT60 and the UK195.”

“In fact, our relationship with their family goes back even further as their father built a cutter here 25 years ago. So we are extremely pleased to be working with them again with this new trawler.”

The relationship with designer and naval architect Vripack has been taken to the next level as they were the creatives behind the bigger sister vessel as well. “By rearranging the traditional lay-out we ensured that the ship trims as naturally as possible. Fishing vessels traditionally trim aft a bit, especially with a full hold. This adversely affects the ideal streamline of the vessel, resulting in less comfort at sea and higher fuel consumption. The weight components are more evenly distributed under varying conditions when placing the wheelhouse and the fish hold a bit forward,” explains Ierring Faber, Naval Architect at Vripack.

Construction of Meindert Senior’s hull will take place in Poland, followed by outfitting at Damen Maaskant Shipyards Stellendam. Delivery is scheduled for Q2 2019.

Damen Shiprepair & Conversion (DSC) has a worldwide network of sixteen repair and conversion yards of which twelve are located in North West Europe. Facilities at the yards include more than 50 floating and (covered) drydocks, the largest of which is 420 x 90 metres, as well as slopes, ship lifts and indoor halls. Projects range from the smallest simple repairs through Class’ maintenance to complex refits and the complete conversion of large offshore structures. DSC completes around 1,350 repair and maintenance jobs annually, both at yards as well as in ports and during voyage.